The Democratic plan for energy independence… 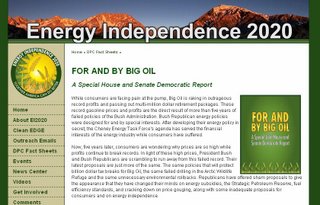 Read the whole thing… talk about fearmongering and paranoia!

* Tax and fine oil companies, most of which are public companies and owned by any investor who cares to purchase shares and receive profits in the form of dividends. Taxes, fines, and legal fees are certain to hamper American oil firms’ R&D and exploration. Even a caveman can arrive at the sum of this equation: it will end up costing consumers even more at the pump.

* Democrats want to create yet another Government agency to create “Revolutionary Energy Technologies” (as if there aren’t already enough free-market incentives for new energy alternatives).

The democrats plan on doing all of this without building another refinery, drilling another well, or exploring for more domestic reserves.

We saw during Hurricane Katrina just how vulnerable America is because of our lack of investment and development of our oil industry. The democratic plan, of course, ignores this.

And, the democrats plan on persecuting American oil companies while Chinese companies, with their abysmal environmental records, continue to explore and drill just miles from our Florida shores.

Another “Hope” plan? Just like the democratic plan for defense where the dems give terrorists all of the rights of US citizens and pull back from fighting terrorists overseas hoping they won’t strike us again in our homeland, the democratic energy plan hopes that the US can discover and produce alternative sources of energy before oil hits $100 per barrel. Both plans are unrealistic and leave America less secure.

It’s hard to imagine how this energy plan is going to help America.

Previously:
Thanks to Democratic “No Zones”, the US Is in Grave Danger
It’s Official, Cuba Hires China to Drill Oil Off Florida Coast
Despite Oil Crisis, Democrats AGAIN Block US Firms from Drilling!
Democrats Crack Gas Jokes Then Vote Against US Oil Development
Union Protesters Get Lost, End Up at White House
Democrats Fail to Prevent Senate Oil Drilling Bill from Passing
Despite Global Oil Crisis, Dems Will Block Drilling & Exploration!