The democrats took control of the US Senate it was announced just minutes ago.

The Libertarians in Montana and Missouri did their part to help. 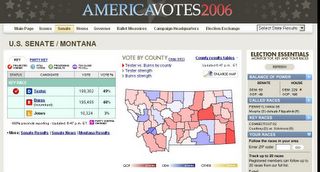 Volokh Conspiracy noticed that Libertarians helped provide far more than the margin of victory between Tester and Burns. (Via CNN) 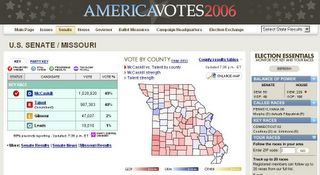 And, Claire McCaskill can thank the Libertarians for her win over conservative Republican Jim Talent. (Also, via CNN) This one is difficult to understand as Jim Talent was a staunch conservative voter.

Glenn Reynolds noted this growing force earlier today including this from The Economist:

“Libertarians are a generally Republican-leaning constituency, but over the last few years, their discontent has grown plain. It isn’t just the war, which some libertarians supported, but the corruption and insider dealing, and particularly the massive expansion of spending. Mr Bush’s much-vaunted prescription drug benefit for seniors, they fume, has opened up another gaping hole in America’s fiscal situation, while the only issue that really seemed to energise congress was passing special laws to keep a brain-damaged woman on life support.”

It looks like everyone was discontented before Tuesday. Now the democrats can sort it all out.