Kofi Annan weeps… One genocide was actually confronted during his tenure.

The UN Secretary General nips at the US during his final European press conference in Switzerland as head of the UN. 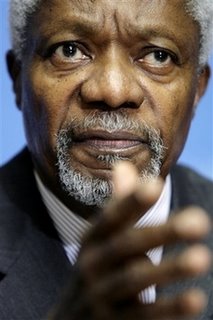 Kofi “Give Me Genocide” Annan, said on Tuesday, during his last European presss conference, that the war in Iraq could have been avoided with more inspections. Kofi also took some final parting shots at the Bush Administration:

“On the question of the military presence, it is a difficult issue. The US is in a way trapped in Iraq, trapped in the sense that it cannot stay and it cannot leave,” Annan told a press conference.

“The timing of its departure will have to be optimal,” he added.

An eventual withdrawal of US forces should “not lead to a further deterioration,” Annan cautioned.

He said Washington should instead “try and get it to a level that when it withdraws, the Iraqis themselves will be able to maintain a situation that would ensure a reasonable secure environment.”

With just 40 days to go before the end of his mandate, it was the first time Annan had so clearly stated that the United States should withdraw from Iraq at some point, sources close to the secretary general said.

Meanwhile, as Kofi piddles, the Janjaweed continue their slaughter in the Darfur.

The ill-fated, incompetent and lethal legacy of Kofi Annan will not soon be forgotten.
(Hat Tip Pete Bondurant)