I’m sure that Speaker Pelosi will be outraged by this decision in her district back home. No doubt, she will hold a press conference shortly to condemn the actions banning the Junior ROTC programs in San Francisco. 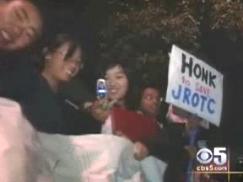 Children protested outside the building where the school board was meeting to vote on the JROTC Program. 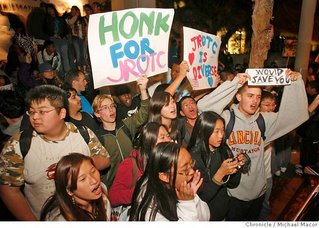 High schools across the city of San Francisco soon will no longer have Junior Reserve Officers’ Training Corps programs, after officials decided to eliminate them because of the Pentagon’s “Don’t Ask, Don’t Tell” policy regarding gay service members.

The Board of Education voted 4-2 late Tuesday to phase out the JROTC from schools over the next two years, despite protest from hundreds of students who rallied outside the meeting.

“One of the big components (of JROTC) is military branding, military thinking and military recruitment, and that has to stop,” board member Dan Kelly said during the meeting.

About 1,600 San Francisco students participate in JROTC at seven high schools across the district.

The opponents to the JROTC also vented their displeasure with the program during the meeting. 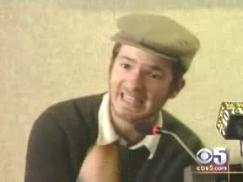 CBS5 also has video from the unhinged meeting in the nation’s nuttiest city.

Michelle Malkin has much more on this latest San Francisco meltdown.