A transition is not always a pleasant thing to watch as it happens. But when common goals are achieved, speed bumps and differences of opinion along the way are soon forgotten. Every great work of art goes through messy phases while it is in transition. A lump of clay can become a sculpture; blobs of paint become paintings which inspire. The final test of our efforts will not be the isolated incidents that report daily, but the country that the Iraqis build.

Iraqi civilian casualties were down significantly in October. 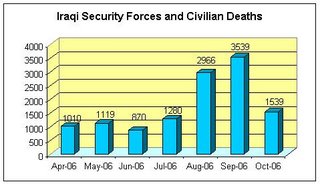 At the Multi-National Forces Press Briefing earlier today (November 20, 2006), General Caldwell reported that the Iraqi Forces are moving closer to taking over security for the young democracy:

During the Ramadan period, where violence was at its highest, perceptions of security among residents in the focus areas here within Baghdad continue to improve, with just over 50 percent of them saying the security in the neighborhoods had, in fact, improved, with over 70 percent of the residents responding they felt somewhat or very secure in their neighborhoods.

This, however, did not reflect the same across the city of Baghdad. The reduced violence is likely in part due to the end of Ramadan, to increased calls for peace and reconciliation by Iraqi political leaders, clerics and sheikhs, coalition force operations, and Eid al- Fitr celebrations…

QUESTION: Thank you. Chris Bodine (sp) from AP. President Talabani in Paris today was talking about a two- to three-year sort of timeline for U.S. troops to leave Iraq. He thought that would be possible for all U.S. troops to leave by that time. I just wanted to get your response to that. Is he basing this on any sort of information that has been shared between the U.S. and Iraqis?

GEN. CALDWELL: Well, I think we’re all moving very positively in the right direction toward standing the Iraqi security forces up in sort of that third phase where they’re totally able to conduct independent operations with minimal coalition force support. The prime minister has been very clear in discussions with the president of the United States just this past week that he wants to accelerate that process, that he wanted to add additional force structure, and both those things are, as we speak, being put into place. And he’s made the announcement about increasing the force structure, which will be at 30,000, and we’re already working the plans in coordination with the government of Iraq on how to accelerate the transfer of authority on a faster basis than was originally envisioned perhaps being done.

I mean, the bottom line is we’re here as guests of the government of Iraq. We’re going to support the prime minister in his endeavor. There has just been a high-level committee that’s been formed now to specifically address those issues, and we just as much as everybody else wants to see them move forward and be successful.

AJ Strata has more on the positive security developments in Iraq.

Victor Davis Hanson spells out what is at stake with Iraq for Western society.

Apparently, in the latest leaked story to the media, the Washington Post reports the Pentagon is suggesting three options for Iraq and is choosing to back a limited troop increase focused on training.