Do you remember the story about Lance Cpl. John McClellan?… The hero who survived a sniper attack in Iraq? The Stars and Stripes reported on “Lucky” McClellan a couple of weeks ago:

Doctors told his family that 99 of 100 patients with similar injuries die. But he was the other one. 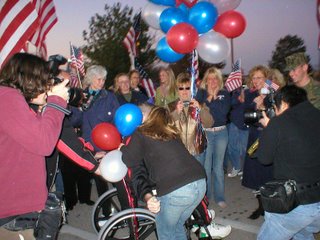 And, John’s mother Carol wrote in with this wonderful news yesterday:

John and I left the hospital about 9:30 and got to the Tampa airport around 10:10. From there we were treated like ROYALTY!!! We had to go through Security, but not nearly what everyone else had to do. THEN, we were bumped to First Class on the Chicago to St. Louis flight!!! What a TRIP that was!!! I’ve never been 1st class in my life. It even beats the C130 flight…..lol. We were served a very nice lunch and offered unlimited drinks of ANY choice, unlimited hot chocolate chip cookies……………it was GREAT!! AND, as we were preparing to deplane, the captain announced that Marine Lcpl John McClellan was on the plane, and asked those who would like to show their appreciation, and everyone started clapping and cheering as we debarked. Now, if that’s not a mother’s proudest moment, I don’t know what is. John and I were both curious how they knew his rank, as we never mentioned it………? Anyway, it was fabulous.

Then, we got to Chicago, and quickly went to our next flight and got bumped to FIRST CLASS AGAIN!!!! (John said when he is all recovered, he’s going to hang on to his wheelchair, helmet and Marine shirt for ALL of his future flights………………….LOL……….. I THINK he was just kidding????? LOL). This was just a 45 minute flight so, before we knew it, we were landing. Again, the captain announced about John and everyone started clapping and cheering……………very cool.

And, throughout all the airports, people would come up and thank him for his service. It was very good.

THEN, the REAL highlight came when we landed in Columbia. John and I were in the very front seat of the commuter plane, so we didn’t have any windows, but as the plane was pulling into the terminal, we could hear the other passengers talking about all the commotions outside, wondering “what the heck is going on?” There were a BUNCH of people awaiting our arrival. It was pretty funny. The pilot had us wait until everyone got off the plane. And a couple of times, I guess the crowd thought it was John or me coming out and they started cheering and then stopped, and then again started “mischeering” and then stopped. FINALLY, when we got off the plane, they resumed cheering and did NOT stop. It was amazing!

We proceeded to the terminal, and Carl was the first person to meet us which was great!!!! Then, we proceeded through the terminal, to the outside, and there they ALL were!!!! I don’t know how many were there, but it seemed like hundreds!!! They had so many American flags and banners, it was so incredible. Then, Susie Edwards, John’s Godmother, (and my second savior, as she’s the one who has taken care of my workload for the past two months) presented him with the quilt which is SOOOOOOOOO awesome. It has TONS of signatures on it.

** Jules Crittenden offers a wonderful “A View from Plymouth Rock” this Thanksgiving morning!