The honored guest at the 2004 Democratic Convention Michael Moore embarrassed himself terribly today in his latest America-Hating Cut and Run rant posted at Daily Kos. 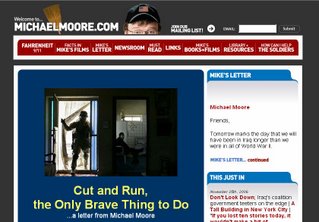 Where were all the suicide bombers when Saddam was oppressing them? Where were the insurgents planting bombs along the roadside as the evildoer Saddam’s convoy passed them by? I guess ol’ Saddam was a cruel despot — but not cruel enough for thousands to risk their necks. “Oh no, Mike, they couldn’t do that! Saddam would have had them killed!” Really? You don’t think King George had any of the colonial insurgents killed? You don’t think Patrick Henry or Tom Paine were afraid? That didn’t stop them. When tens of thousands aren’t willing to shed their own blood to remove a dictator, that should be the first clue that they aren’t going to be willing participants when you decide you’re going to do the liberating for them.

What is obvious from this latest Cut and Run Letter is that Michael Moore, like most of the America-hating Leftists, missed the trial of real villain of Iraq (not George Bush) Saddam Hussein.

If Moore was more up on his facts instead of his loathing for President Bush he would know that the reason Saddam was sentenced to death by hanging was because he slaughtered over a hundred and forty of the insurgents who “risked their necks” by opening fire up on Saddam’s entourage in al-Dujail back on July 8, 1982. 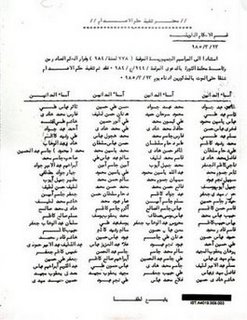 A facsimile made available by the Iraq High Tribunal court, showing page one of a two-page document confirming executions which was entered into evidence at the Saddam Hussein trial in Baghdad, Iraq, on Tuesday Feb. 28, 2006. The March 23, 1985, report from the execution committee confirmed that the executions of 148 people had been carried out and that some of the named people were mistakenly released instead of being executed, and that other prisoners not on the list were executed by mistake. The document was among several presented by chief prosecutor Jaafar al-Moussawi, and after about two hours of hearing documents, the court adjourned. (AP Photo/Iraqi High Tribunal) 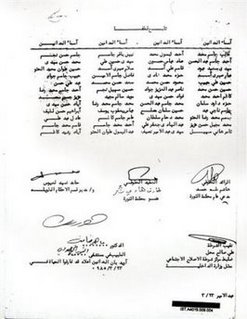 Page two of the evidence. The March 23, 1985 report from the execution committee confirmed that the executions of 148 people had been carried out and that some of the named people were mistakenly released instead of being executed, and that other prisoners not on the list were executed by mistake! (AP Photo/Iraqi High Tribunal)

Interesting too is what Michael Moore and the Left refuse to understand about their dictator/victim Saddam Hussein.
Iraq the Model had this take back in February 2006:

The documents revealed some unbelievably terrifying facts about the Dujail massacre; can you imagine that when orders were given to execute the 148 “convicts” the prison authorities executed only 96 of them. Why?

Because the remaining 48 “convicts” had already passed away during “interrogation”!!

What kind of interrogation was that killed one third of the suspects?!

Oh… And isn’t it just a little bit ironic that the men, women and children from Dujail were sent to Abu Ghraib prison where they were mercilessly tortured and murdered by the Saddam Regime. You can bet that this slipped under the radar by the America-Haters reading Moore’s blog.

I guess Michael Moore never was too big on the facts but this is just embarrassing.

Previously:
Saddam’s Signature on Orders of Execution May Bring His Own
The Saddam Verdict and the Evidence That Will Hang Him