Bush… “We got a thumpin… Donald Rumsfeld will resign.”
Video Here. 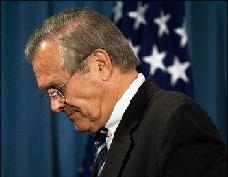 Republican officials said Defense Secretary Donald Rumsfeld is stepping down. Word came a day after the Democratic gains in the election, in which Rumsfeld was a focus of much of the criticism of the Iraq war.

Well it took a few years of campaigning, but the mainstream media finally won out against the Secretary of Defense:

May 8, 2004
Media questions if Rumsfeld will resign.
BBC reports:
Asked if he would step down to remedy the damage done to America’s reputation, Mr Rumsfeld said he would not do so under political pressure.

September 10, 2004
Media questions if Rumsfeld will resign.
The Defense Department reported:
Furthermore, the panel said, Secretary Rumsfeld and his aides had failed in not anticipating and responding swiftly to the post-invasion insurgency in Iraq. But Schlesinger answered no, resoundingly, when asked whether Secretary Rumsfeld or other high-ranking Pentagon officials should resign. Schlesinger said such a decision would be, quote, “a boon for all of America’s enemies.”

November 7, 2004
Media questions if Rumsfeld will resign.
Times Dispatch reported:
Rumsfeld signals he won’t ‘fade away’
Although no one expects Pentagon policy shifts during a second Bush term, there’s a lot of chattering about Rumsfeld’s future. “The $64,000 question becomes what happens to Secretary Rumsfeld,” said Thomas Donnelly of the American Enterprise Institute.

Some are not convinced Rumsfeld will leave voluntarily. Asked in September if he intended to “fade away,” like Gen. Douglas MacArthur, Rumsfeld said, “I’m old enough to have heard that fellow say that. And I don’t intend to say it.”

December 3, 2004
Media questions if Rumsfeld will resign.
MSNBC reported:
“Rumsfeld to stay as defense chief!”
The secretary’s future had been the subject of much speculation, after revelations about abuses at Abu Ghraib and other U.S.-run prisons in Iraq.

December 19, 2004
Media questions if Rumsfeld will resign.
CBS News reported:
The chairman of the Senate Armed Services Committee said a change would be too disruptive, given the elections scheduled in Iraq for Jan. 30. (Senator John Warner)

December 23, 2004
Media questions if Rumsfeld will resign.
The BBC asks:
Because Rumsfeld did not sign letters to the relatives of soldiers killed in Iraq and Afghanistan do you think he should resign?

February 4, 2005
Media questions if Rumsfeld will resign.
Boston.com reported:
“Rumsfeld says he twice offered to step down”
Defense Secretary Donald H. Rumsfeld said yesterday that he twice offered his resignation to President Bush over the Abu Ghraib prisoner abuse scandal, but both times was asked to stay in the job.

February 7, 2005
Media questions if Rumsfeld will resign.
USAToday reported:
“My goodness, it happened on my watch,” he said. But, he added, “On the other hand, if secretaries of defense resigned every time someone did something they shouldn’t do, out of the millions of people involved in the defense establishment – or a mayor or a governor, something happened in their country, you wouldn’t have anyone in public office.

June 24, 2005
Media questions if Rumsfeld will resign.
CBS reported:
Grilled Rumsfeld Anyone?
Arguing that “the American people, I believe, deserve leadership worthy of the sacrifices that our fighting forces have made, and they deserve the real facts,” Kennedy told Rumsfeld, “I regret to say that I don’t believe that you have provided either.”

“Well, that is quite a statement,” huffed the Secretary of Defense, who pointedly told Kennedy, “The suggestion by you that people — me or others — are painting a rosy picture is false.”

But the Massachusetts senator, who has been one of the most ardent Congressional critics of the war, wasn’t buying the secretary’s line. Nor was Kennedy cutting Rumsfeld any more slack.

“In baseball, it’s three strikes you’re out,” Kennedy told Rumsfeld. “Isn’t it time for you to resign?”

March 23, 2006
Media questions if Rumsfeld will resign.
AFP reported:
US Defense Secretary Donald Rumsfeld brushed off calls for his resignation and said he had no plans to step down.

The flurry of calls for Rumsfeld’s resignation coincided with sinking public support for President George W. Bush after three years of war in Iraq and new fears of it turning into a full-blown civil war.

“Those kinds of calls have been going on for five-plus years. And the president has asked me not to get involved in politics and that’s politics,” Rumsfeld said. 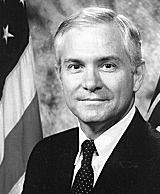 Tuscon Citizen reports:
Rumsfeld, 74, was in his second tour of duty as defense chief. He first held the job a generation ago, when he was app
ointed by President Ford.

Gates is a member of the Iraqi Study Group with James Baker.

My previous thoughts on Rumsfeld remain unchanged…
He accomplished much and was a great success.