In 2001 the Taliban destroyed the largest standing Buddhist statues in the world by blasting them from a cliff because of their sinful nature.
(YouTube video of the blasts 38 seconds)

Afghanistan authorities now believe that Osama bin Laden was the mastermind behind this destruction.
The Middle East Times reports:

At the scene of the crime carried out in 2001 all evidence points to Osama Bin Laden as the mastermind. “This is the terrorism of the Taliban,” says Rahim, an official at the work site in front of the empty niche of the biggest of the two statues, one of which stood 55 meters (182 feet) tall and the other 38 meters.

Wearing a hard hat and a mask over his mouth, one of the workers, Rajab, is trying to save the remains of the destruction in which one of his family members played a part. “The Taliban took Ali Reza, one of my relatives, and they suspended him from a cable at the side of the Buddhas. Then they forced him to beat at the statues with an axe and an iron rod,” he says. “They took four or five like him, to punish them for having fought against them.”

He says that there were Arabs, Pakistanis, and Chechens among the Taliban fanatics who oversaw the demolition of the ancient relics – until then the largest standing Buddhist statues in the world – carried out on the orders of the head of the Taliban regime because they were deemed idolatrous.

One of his colleagues, Abdul Ali, adds: “The Taliban were the executors, but the masterminds were the Arabs and the Pakistanis.”

At the nearby village of Sangchaspon, where the government has sent people who once lived in caves dug into the cliff around the Buddhas, two more witnesses give a similar account. “They started with tanks but that did not do much damage so they brought in explosives,” says Mirza Hussein, another of the prisoners that the Taliban brought in to destroy the Buddhas.

Documents found in Kabul after the fall of the Taliban attested to the influence exercised by Bin Laden and Al Qaeda on Mullah Mohammed Omar, head of the Taliban regime, which led him to decide to demolish the monuments.

The destruction of the Buddhas was an expression of the ultraconservative salafi Islam, whose followers believe it to be a pure form of the religion, according to Afghan specialist Olivier Roy, who adds that Al Qaeda followers are salafists.

The destruction of the Buddha, he said, was proof of the influence of the terror network on the Taliban.

The destruction of the two Bamiyan Buddhas allowed Al Qaeda to drive the Taliban to a point of no return with the international community. 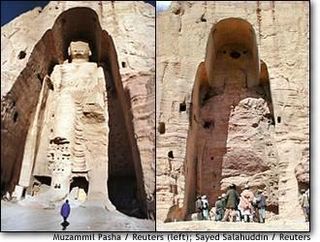 A gap in a cliff is all that remains of the Bamiyan Buddhas–shown here in a 1997 file photo–after the Taliban demolished the celebrated statues in 2001. (MSNBC)

Free Thoughts has this and much more.