Sandmonkey and From Beirut to the Beltway have the latest on the tense situation in Lebanon. 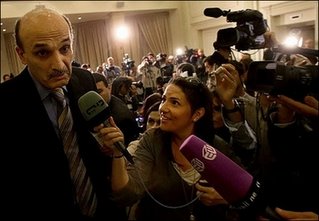 Lebanese anti-Syrian leader Samir Geagea(L) speaks to journalists at the end of Lebanese leaders meeting in Beirut. A UN probe into the assassination of former premier Rafiq Hariri lies at the heart of the resignations of five Shiite ministers from the Lebanese government.(AFP/HO/Haitham Mussawi)

On Sunday, Al Qaeda sent out a letter stating it will destroy the government of Lebanon:

A group identifying itself as ‘Al Qaeda Lebanon’ issued a statement Sunday threatening ‘to destroy the corrupt cabinet that takes orders from the US administration.’

‘We have reached Lebanon and we will work on destroying this government and all the other agents. Let them know that we are after them, with God’s will,’ the statement said.

The statement came with the country in political crisis following the resignation of the five Shia ministers.

All belong to the pro-Syrian Amal and Shia Hezbollah groups.

That’s interesting. Al Qaeda claims a government with at least 5 Pro-Hezbollah ministers is acting too Pro-US. Figure that out(?)