Al Qaeda says they won’t rest until they blow up the “filthy” White House! 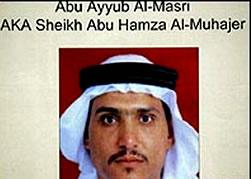 Abu Ayyub al-Masri, also known as Abu Hamza al-Muhajir, took over Al Qaeda after the US took out Al Zarqawi.

Strategy Page could not have been more correct!
The AP reports, via Lucianne:

Al-Qaida in Iraq claimed in a new audio tape Friday to be winning the war faster than expected in Iraq, saying it had mobilized 12,000 fighters.

The group also said it welcomed the Republican electoral defeat that led to the departure of Defense Secretary Donald H. Rumsfeld, and it added that its fighters would not rest until they had blown up the White House.

Abu Ayyub al-Masri, also known as Abu Hamza al-Muhajir, also urged the U.S. to stay in Iraq so his group would have more opportunities to kill American troops.

“The al-Qaida army has 12,000 fighters in Iraq, and they have vowed to die for God’s sake,” a man introduced as al-Muhajir said in an audio tape made available on militant Web sites.

“We will not rest from our Jihad until we are under the olive trees of Rumieh and we have blown up the filthiest house – which is called the White House,” al-Muhajir said.