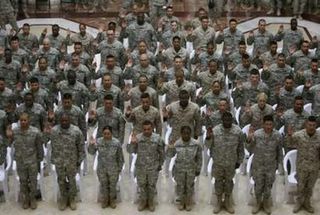 U.S. soldiers take their oath of citizenship at a U.S. military camp in Baghdad, November 11, 2006. About 75 soldiers from 33 countries became U.S. citizens during the military naturalization ceremony at Camp Victory. (REUTERS/Erik de Castro)

And, in other positive news from the quagmire, Iraqi army officials captured the Al Qaeda leader of Al Anbar province it was announced late Saturday:

The comments by the Iraqi al Qaeda leader not withstanding, Iraqi army officials announced they had captured the Egyptian leader of an al Qaeda cell in restive Anbar province.

Acting on a tip, Iraqi soldiers descended on a building in the city of Rawah, 175 miles northwest of Baghdad, where they arrested local al Qaeda commander Abu Muhayyam al-Masri, whose name, like that of the group’s overall leader, is a pseudonym meaning, “the Egyptian.” Two top aides and nine other insurgents were also seized in the raid.

Rawah is located deep in Anbar province, where Sunni Arab insurgents routinely launch deadly attacks on U.S. and Iraqi government forces that show no sign of diminishing in numbers or intensity, more than three years after the U.S. invasion.