Two 15 year old boys were arrested after they were identified from the Wal-Mart surveillance video and by peers at a local McDonalds.

WCSH6 has a video report HERE 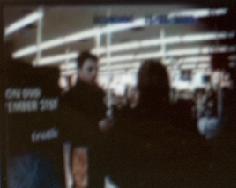 The boys set off the bombs in the pet area and toy section of the Wal-Mart store in Skowhegan, Maine. They had planted more bombs on top of a local Chinese restaurant but these bombs did not go off.
The Kennebec Journal reported:

The boys’ identification is being withheld until their first court appearance. McCausland did not know when the appearance was scheduled to occur.

The boys were arrested after their faces were shown on television newscasts late Saturday night, prompting one of the boys’ parents to meet with investigators, McCausland said.

Investigators had already identified the boys by showing the pictures taken by Wal-Mart security cameras to teenagers at a Skowhegan McDonalds.

At least eight people were treated for irritation to their eyes and throat or for ringing in their ears, McCausland said. Two were taken to a local hospital, and they were treated and released. The rest were treated in the Wal-Mart parking lot by ambulance crews.

Investigators believe the boys had made three additional explosive devices that did not explode. Fire marshals collected the bombs from the roof of a downtown Chinese restaurant and two were placed on the lawn of one of the boys’ friends, McCausland said. There is no evidence that this was any type of protest against Wal-Mart. 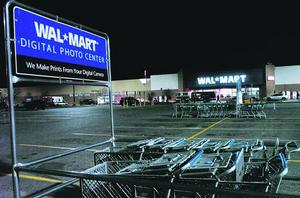 The parking lot at Wal-Mart in Skowhegan is empty on Saturday night after explosions caused officials to evacuate the store. (Kennebec Journal)

Police are witholding the youth’s identities until after their court date.