Claire McCaskill has held rallies in front of the biotech firm the Stowers Institute for Medical Research in support of embryonic stem cell research.

The owners of this congolmerate have donated 97% of the $29 million behind the stem cell initiative, Amendment 2! 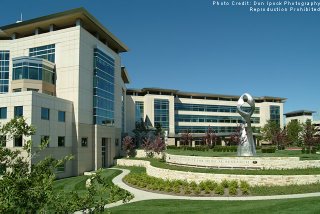 This came out in the news yesterday in Kansas City.
Free Republic reported:

KANSAS CITY, Missouri, November 6, 2006 (LifeSiteNews.com) – A massive biomedical research conglomerate has funded 97 percent of the campaign to raise voter support for the controversial Missouri bill Amendment 2, which would permit stem cell research and cloning using human embryos, according to a report by Fox News Nov. 3.

Billionaire couple Jim and Virginia Stowers have directed $29 million to funding promotion of the bill through “The Missouri Coalition for Lifesaving Cures,” a campaign of television, radio, print and billboard ads attempting to convince voters to support the measure at the polls November 7.

While the couple are known as devoted philanthropists who firmly believe in funding research for medical breakthroughs, their financial connections to the biomedical sector are less well known. The couple has founded a bio-technology empire that includes an investment company with significant holdings in the healthcare sector and a non-profit biomedical research center, with a for-profit branch that markets research discoveries to medical and pharmaceutical companies.

Jim Stowers is the founder and CEO of American Century Investments, a firm with a $100 billion portfolio that invests heavily in healthcare, including biotechnology, pharmaceutical and healthcare equipment and supply companies. Fox News suggested Stowers’ company would be well positioned to benefit from the anticipated flood of investment capital into the state if Amendment 2 would pass.

The BioMed Valley Partnership includes Kansas University and the University of Missouri-Kansas City–researchers pass their work to BioMed Valley Discoveries in exchange for funding endowments.

Records also show Jim and Virginia Stowers have made significant donations to members of the legislature who support their research.

Last week Bill O’Reilly talked with Jamie Allman about the profits that may be made from the research:

Bill O’Reilly followed up his sly insinuations of last week with an interview of St. Louis’ KFTK radio host Jamie Allman, who supports O’Reilly’s charge that Jim and Virginia Stowers are promoting Amendment #2 in Missouri (allowing embryonic stem cell research) so that they can make more money – “billions!”