Well we wouldn’t want this… 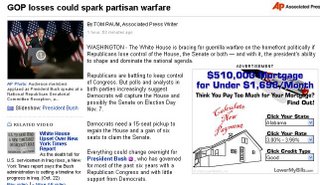 Excuse me for missing how cordial the liberals have been since they lost power in government.
Today’s headline:

When former nazis are comparing the behavior of liberals to that of the nazi “storm troopers”, I think the war already started a while back.

The Los Angeles Times adds this to the discussion… “From the outset of his presidency, Bush has accepted division as the price of mobilization.”
Translated that means… Bush is not a liberal and that makes liberals mad.