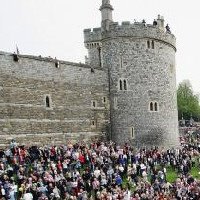 The Queen is allowing a room at Windsor Castle to be used as a Muslim prayer zone.

The move came after a request from 19-year-old student Nagina Chaudhry, who works in the visitors’ shop, a royal spokeswoman said.

An office at the castle has now been set aside for her to offer lunchtime prayers during the holy month of Ramadan, a time of fasting.

A spokeswoman for Buckingham Palace, where such a facility already exists for Muslims, said: “Miss Chaudhry made a request for somewhere to pray.

“During Ramadan if she wants to use this office for praying then that’s fine.

“We are an equal opportunities employer and we do our best to facilitate any requests made by our employees.”

When not being used as a prayer chamber, the room will continue to be used as an office.

Miss Chaudhry, speaking to the Daily Mail newspaper, said: “It feels amazing to be the first Muslim to read namaz (prayers) at Windsor Castle.