“I want to go and help the Iraqi people. I want to let them know we’re not all ignorant fools.”

A former human shield for Saddam Hussein, Christiaan Taylor Briggs, was sentenced to eight months in prison for cold-cocking a popular British musician and putting him in a coma.
Nice T-shirt… 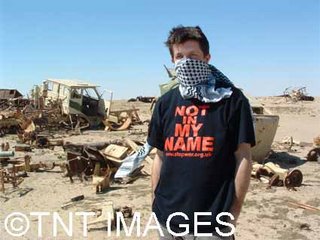 The musician, Billy Leeson, had to be resuscitated in hospital, had to learn how to walk again, and must endure a fourth operation on his brain.

Christiaan Briggs was sentenced on Monday to eight months in jail after cold-cocking a musician and walking away smirking as the man lay unconscious on the ground. Briggs did not turn himself in for several days after the attack.
UK News reports:

A smirking peace activist who left a rising rock star fighting for his life after a row over his girlfriend was jailed for eight months today.

Christiaan Briggs, 30, attacked 19-year-old singer Billy Leeson and left him in a coma, after Mr Leeson asked him to stop staring at his girlfriend on a late night number 29 bus.

After punching the teenager Briggs, who went to Iraq as a peace activist in 2003, walked away “smirking”.

Mr Leeson fell into a coma when he hit his head in the pavement and the judge at Snaresbrook Crown Court said: “It was obviously a miracle that he lived.”

Mr Leeson, lead singer of rock band Les Incompetents, who supported Pete Doherty’s group Babyshambles, had to have a series of brain operations after the near-fatal punch in Camden, North London.

His musical career is now on hold after surgeons had to remove a large piece of bone from his skull to lessen pressure on his brain.

He had to be resuscitated in hospital, had to learn how to walk again, and must endure a fourth operation on his brain.

In his victim impact statement, the teenager said he was still in a lot of pain and has lost three stone in weight.

He said he did not remember the attack, but when he awoke from his coma, he had “so many holes in my body I assumed I had been tortured.”

New Zealand-born Briggs, a technician at a major firm of chartered surveyors who turned himself in to police following publicity about Mr Leeson’s injuries, had previously acted as a human shield in Iraq in 2003 in the hope of warding off a US attack.

Florida Cracker has more on Briggs including this account on what moved him to be a human shield:

“You must be the change you wish to see in the world.”

Right on, Brother Christiaan! Right on!

The Jawa Report has more and says this isn’t the first time.
Tim Blair has the lawyer’s lame defense of this thug. The judge bought it.
Lumberjacks says Briggs will now be able to spread his peace message in prison.