Pakistanis carrying hezbollah flags protested an attack on a madrassa that killed 80 militants on Monday. 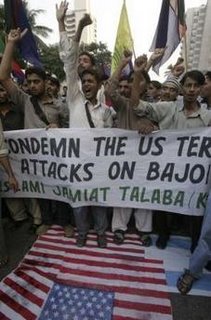 Pakistani students from the Islami Jamiat-e-Talba group chant slogans during a protest in Karachi October 30, 2006 against an army attack on a religious school in the Chenagai area of the Bajaur tribal region bordering Afghanistan. Pakistani army helicopters killed around 80 suspected militants on Monday in a dawn attack on the religious school run by a pro-Taliban commander wanted for harbouring al Qaeda fighters, a military spokesman said. (REUTERS/Athar Hussain)

An Al Qaeda linked cleric in the region who has praised Bin Laden and Mullah Omar publicly said that that the attacks were ordered by America:

Funerals have been held in Pakistan for people killed in a helicopter strike on an Islamic school which the government says was used by militants. There were angry scenes as they were buried – with denunciations of Monday’s attack by Islamists, who say most of the 70-80 people who died were pupils.

But officials insist the victims were fighters. The raid occurred in a remote tribal area near the Afghan border.

The region is said to provide refuge for al-Qaeda and Taleban militants.

A local leader with suspected links to al-Qaeda, Faqir Mohammed, addressed a crowd of 10,000 mourners.

“The government attacked and killed our innocent people on orders from America,” he is quoted as saying by the Associated Press news agency.

10,000 mourners showed up for the funerals today. 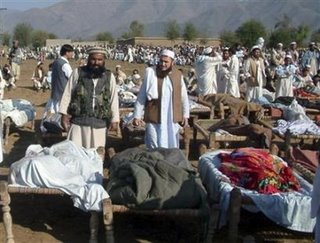 Tribesmen gather near the bodies of those killed during a Pakistan army air strike in Chenagai in the Bajaur tribal region bordering Afghanistan, October 30, 2006. (Reuters)

Bill Roggio has more on the airstrikes at the Bajaur Training Camps.