Petty Officer 2nd Class Michael A. Monsoor is only the second Navy Seal to die in the Iraq War. 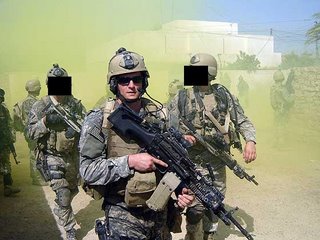 Petty Officer 2nd Class Michael A. Monsoor was supposed to come back home from Iraq in about two weeks. He sent this photo home from Iraq days before he died. (Military Photos)

Monsoor was posthumously awarded the Silver Star for his actions May 9 in Ramadi, when he and another SEAL pulled a team member shot in the leg to safety while bullets pinged off the ground around them. (AP)

CORONADO, Calif. – A Navy SEAL sacrificed his life to save his comrades by throwing himself on top of a grenade Iraqi insurgents tossed into their sniper hideout, fellow members of the elite force said.

Petty Officer 2nd Class Michael A. Monsoor had been near the only door to the rooftop structure Sept. 29 when the grenade hit him in the chest and bounced to the floor, said four SEALs who spoke to The Associated Press this week on condition of anonymity because their work requires their identities to remain secret.

“He never took his eye off the grenade, his only movement was down toward it,” said a 28-year-old lieutenant who sustained shrapnel wounds to both legs that day. “He undoubtedly saved mine and the other SEALs’ lives, and we owe him.”

Monsoor, a 25-year-old gunner, was killed in the explosion in Ramadi, west of Baghdad. He was only the second SEAL to die in Iraq since the war began.

Two SEALs next to Monsoor were injured; another who was 10 to 15 feet from the blast was unhurt. The four had been working with Iraqi soldiers providing sniper security while U.S. and Iraqi forces conducted missions in the area.

Military Photos has more on Monsoor:

He was an adventurer who enjoyed traveling in Europe while he was deployed in Italy and loved snowboarding, fast cars and motorcycles.

He was also “honest, straightforward and a great friend.”

A family member who answered the door at Monsoor’s home in Garden Grove said the family was too distraught to comment.

Monsoor enlisted in the U.S. Navy in March 2001 and became a SEAL in January 2002, said Lt. Taylor Clark, a spokesman for the Naval Special Warfare Command.

Froggy at Blackfive is pushing for Monsoor to be nominated for his consistent valorous conduct.

Michelle Malkin notes that today it the birthday of the Navy- 231 years old today!