The owner of “Stop October Surprises” wrote earlier about incriminating evidence he had regarding the Foley scandal. I occasionally check out the blog and I saw this posted tonight:

This was posted on October 14, 2006 at the mysterious Stop October Surprises blog:

How to Catch an Idiot

Send the moron an email using a tracing tool like ReadNotify, wait until the email is read.

Others pinned the idiot to the Royal Oaks area of Michigan (again network location), which is true. But I caught said moron reading the email account from the address 64.194.245.126. This address is ‘owned’ by the HRC. Not smart. 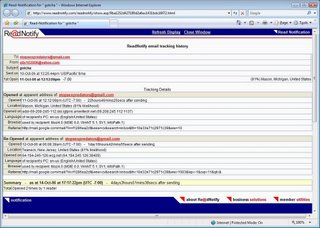 For your information: Human Rights Campaign or HRC is a liberal gay rights organization.
They say they are nonpartisan but you know the deal.

So what we have is someone at the democratic HRC holding the Foley emails until six weeks out from the election. Nice!
Could it be the same democrat who spent months circulating five less insidious Foley e-mails to news organizations?

And… It looks like the “Stop Sex Predator” blog is back in business after a 2 1/2 week hiatus with new rumors of Republican scandal.

Kim at Musing Minds sends the latest updates on the bogus rumors about an Illinois Republican.

Update: Wow! Dan Riehl is on the trail and sees some possible connections.