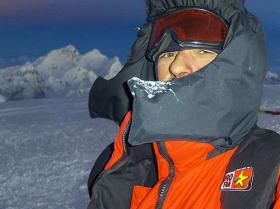 Cho Oyu was the first 8000 meters experience for him and his mate Sergiu Matei (who stayed behind for altitude problems) – an experience they shall never forget, and not exactly for the climb. Currently back in Kathmandu, the guys spare no harsh words on the shootings at Nangpa La. Here is the two climbers’ report.

“While I was up the mountain, pursuing my personal dream, other people were trying to pursue theirs…some 80 tibetan people were trying to cross Nangpa La into Nepal and from there to Dharamsala, India, on a pilgrimage to see the Dalai Lama,” reported Alex. “They were men, women and children, barely wearing decent winter clothes. After an actual human hunt, 8 of them won’t live to see their dream fulfilled. They have been killed in cold blood by the Chinese militia after a snitch between them. This happened in front of many expedition teams. The dead were simply buried in the glacier and left there without any memorial symbol.” 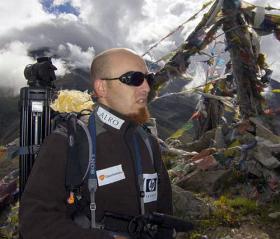 “On October 1 I heard machine-gun bursts… Chinese militias hunting Tibetans like rats, dogs, rabbits – you name it.” In the image, Sergiu Matei during the approaching trek. All images courtesy of the Romanian team / CloudClimbing.ro (Mt.everest.net)

Several children were taken into Chinese custody after the nun they were traveling with was shot dead by the Chinese forces:

At least ten young children from the group of Tibetans who came under fire near the Tibetan border with Nepal on September 30 have been taken into Chinese custody, according to new eyewitness accounts from climbers on Mount Cho Oyu at the time.

About half an hour after one of the Tibetan group, a 25-year old nun, was shot dead by Chinese security forces, a group of children apparently traveling with her was marched in single file through advance base camp at Mount Cho Oyu, according to witnesses.

Tibetan sources say that a young Tibetan boy may also have been killed when the group came under fire.

A British climber and several other witnesses, speaking on the phone from Nepal, described a tense and ‘intimidating’ atmosphere following the shooting as the armed security personnel ‘took over’ advance base camp at Cho Oyu, which is approximately 20 km west of Mount Everest at the border between Tibet and Nepal. Additional reports from the Nangpa Pass area, which is at around 19,000 feet, indicate a stepping up of border security following the incident, with increased movements of troops towards the Tibetan border town of Tingri in the past 24 hours.

The British climber, police officer Steve Lawes, was among a group of climbers and Sherpas at Cho Oyu’s base camp who witnessed both the shooting on September 30 and the subsequent capture of the Tibetan children who were among a larger group of more than 70 Tibetans crossing the glaciated Nangpa-la pass en route to Nepal and exile.