“We Had Abortions” list will highlight Ms. Magazine’s abortion issue coming out this week. The magazine highlights a wonderful story of how a woman who wanted desperately to have another child exterminated the baby she was carrying because she found out it was a Down syndrome baby. 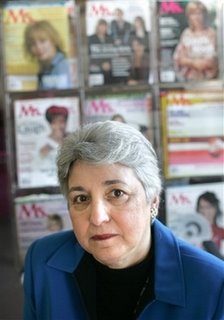 Eleanor Smeal, president of the Feminist Majority Foundation, which publishes Ms. magazine, poses for a photo at her office, Monday, Oct. 2, 2006, in Arlington, Va. In a move certain to roil emotions, Ms. magazine is releasing its fall issue next week with a cover story entitled ‘We Had Abortions,’ accompanied by the names of thousands of women nationwide who signed a petition making that declaration. (AP Photo/Lawrence Jackson)

The Leftist magazine MS is showcasing women who had abortions and are proud of it in next week’s edition:

At a pivotal time in the abortion debate, Ms. magazine is releasing its fall issue next week with a cover story titled “We Had Abortions,” accompanied by the names of thousands of women nationwide who signed a petition making that declaration.

The publication coincides with what the abortion-rights movement considers a watershed moment for its cause. Abortion access in many states is being curtailed, activists are uncertain about the stance of the U.S. Supreme Court, and South Dakotans vote Nov. 7 on a measure that would ban virtually all abortions in their state, even in cases of rape and incest.

“All this seems very dire,” said Eleanor Smeal, president of the Feminist Majority Foundation, which publishes Ms.
“We have to get away from what the politicians are saying,” she said, “and get women’s lives back in the picture.”

Even before the issue reaches newsstands Oct. 10, anti-abortion activists have been decrying it. Judie Brown, president of the American Life League, wrote in a commentary that when she saw a Ms. announcement of the project, “the evil practically jumped right off the page.”

Ms. executive editor Katherine Spillar said more than 5,000 women have signed the petition so far – heeding its appeal to declare they are unashamed of the choice they made. The magazine itself had room for only 1,016 names, she said Tuesday, but all of them will be viewable online as Ms. encourages other women to continue adding their signatures.

Another signatory, Debbie Findling of San Francisco, described her difficult decision last year to have an abortion after tests showed that she would bear a son with Down syndrome.

Findling, 42, is married, with a 5-year-old daughter, and has been trying to get pregnant again while pursuing her career as a philanthropic foundation executive.

Somehow, I don’t think that explanation is going to make people want to rally for the cause!

U.S. Policies in Afghanistan and Iraq Sell Out Women in Favor of Oil

It is not clear where the magazine stands on the Iranian regimes planned stoning of 22 year old female prisoner, Kobra Rahmanpour.

Texas Rainmaker has the T-shirt.