John Kerry called the parents of Joshua Booth on Sunday. On Monday Kerry said the troops in Iraq were stupid. Today The mother of Second Lt. Joshua Booth, a marine who lost his life in Iraq, is asking Senator Kerry to learn more about the military.

Joshua’s parents said they wanted Booth to be buried in Arlington National Cemetery, but he didn’t believe he was worthy of it and wished to be buried in a family plot in Bedford, Va. 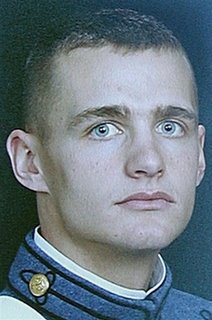 The parents of Joshua Booth said they did not appreciate Senator Kerry calling one day to offer condolences and the next day slamming the troops in Iraq:

Second Lt. Joshua Booth died on Oct. 17. His mother said that what makes Kerry’s words so offensive is that they come one day after Kerry called the family to offer condolences.

“We did appreciate the call. I am appreciative of anyone who reaches out to me and to then turn around and say something that is so totally incorrect,” Booth said.

As to whether Kerry should apologize, Booth said that Kerry needs to do more to make amends.

“In addition to apologizing, he needs to learn a little bit about what our men and women in the military are actually made up of,” Booth said. “We don’t want to send that kind of signal, that you only go into the military if you are not good at anything.”

2nd Lt. Joshua Booth leaves behind his wife, Erica, 21, who is expecting a second child, and their 1½-year-old daughter, Grace M. Booth.

Let Freedom Ring has more on the Booth family.