Joshua Darins Lansdale, (as Josh is known in Platte County Circuit Court) the angry anti-Talent veteran who is stumping with a democratic veterans group around the country, broke his foot playing volleyball and not during action in Iraq.

And, he blames Jim Talent and the Missouri Veterans administration for poor service although he refuses to release his records!
Here is the McCaskill “Josh” ad that is coming under fire…

Josh Lansdale falsely charged he was denied health care fro the Department of Veterans Affairs because of non-existent cuts to the VA budget.

Lansdale disappeared shortly after he made the ad for Democrat McCaskill.
This was found out about Josh’s “battle injuries” while he was missing:

Josh enlightened all Missourians with this message during his starring appearance in Claire McCaskill’s misguided propaganda peace. This description might leave many voters with a mental image of Josh falling in a hail of gunfire and heroically leaving the battlefield with a shattered ankle. Interestingly enough, though, this couldn’t be further from the truth.

According to several sources, the Source has learned the true nature behind Jumpin’ Josh’s injury. Rather than in a glorified firefight, Josh actually ‘busted’ his ankle in an intense volleyball match, believe it or not.

But, after an extensive search, The Source has located him!
The Source reports:

Josh took the political world by storm earlier this year with several ridiculous claims made in a McCaskill propaganda piece. Namely, Josh blamed Senator Talent for waits he endured at a VA Hospital. When asked, however, to justify those claims with appointment records, Josh became indignant and disappeared. He left the McCaskill Campaign with unverified charges to defend alone. Did they jump in the trenches and take the heat? Not even close. Claire Bear pulled the ads off of her website immediately. Apparently they weren’t all that confident in Josh’s word either.

Now, back to our search. The Source charged political pundits all over the show-me-state with one simple task: find out what Jumpin’ Josh is up to. Just as always, Missouri responded. Through both private communications and public websites, Josh has shed some light on his plans for the future and his present whereabouts.

Jumpin’ Josh has taken a trip to L.A. Is it because he needed a break after taking a beating for his alleged lies, as some of his defenders might suggest? Not even close. Josh is heading out to Los Angeles to film another commercial, this time for votevets.org, a democratic anti-Iraq war organization. Josh is doing so to “get my name out there political wise,” according to communications on his my-space account.

The group that made the ad, votevets.org, has created a P.A.C. designed to knock off Republican incumbents nationwide, and is led by former Presidential loser Wesley Clark. The simple fact that the group included Jumpin’ Josh proves them to be an organization lacking in legitimacy…

…Unfortunately, it seems that Josh may become a fixture now in anti-war liberal advertising. Hopefully he manages to find documentation for the next ridiculous claim he puts on television. 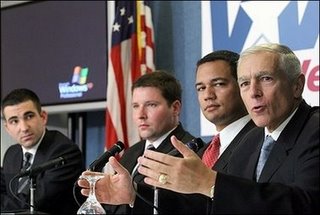