A group of African-American business leaders held a breakfast fundraiser for Talent this morning at the offices of Midwestern Construction Company in old north St. Louis.

Talent told the roomful of nearly 100 black business, civic, and church leaders that too often politicians come to the African-American community and tell them what they are going to do. He said what he tries to do is ask people what they want him to do for them.

“Politicians do that with other communities of interest,” said Talent. “I don’t go to the farmers and say this is what Jim Talent thinks ought to happen in agriculture.”

While Talent made only a couple of indirect mentions of his Democratic challenger, State Auditor Claire McCaskill, his supporters took a more direct approach. 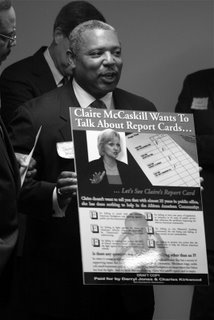 McCaskill gets an “F”.

Darryl Jones held up a glossy poster which read: “…Let’s See Claire’s Report Card”, an answer to the NAACP’s report card which is often referenced by McCaskill supporters. On that report card, the organization gave Sen. Talent a failing grade. On this report card, paid for by Jones and Kirkwood, McCaskill scored F’s in three categories relating to black St. Louis and an F minus in the more general “Fighting for Our Communities” category (click here to see the card).