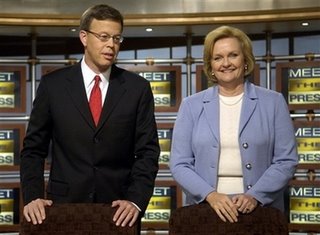 In Claire McCaskill’s Newsweek interview this week you’d swear she was running for office in San Francisco or Massachusetts and not Missouri! Claire thinks that “the number one concern of Missourians is worrying about our ‘stature’ in the world.” Huh? I don’t think the folks in the Boothill or Central Missouri give a rats a$$ about anyone’s stature!

– FLIP –
Now- this comes out about her Newsweek interview from Friday…

Despite the fact that two different St. Louis Democrats who have gone on record about Claire McCaskill’s outrageous Katrina remarks, Claire now claims that her comment about “Bush letting poor blacks die on rooftops during Hurricane Katrina” was “taken out of context”!

This did not go over well for the local democrat, PubDef, who originally reported the story back on September 6, 2006.

This story was later confirmed in the St. Louis Post Dispatch on September 10, 2006 by local democratic bigwig Norma Leggette:

Committeewoman Norma Leggette (4th Ward) isn’t sure what the Democratic Party stands for anymore. She wonders how she’s supposed to excite constituents in her ward about November’s elections.

Leggette said there are two Democratic parties in St. Louis – one that benefits whites and another that ignores blacks. “At one time, Democrats were a solution for us. I don’t know when that changed or why that changed, but it has,” Leggette told me.

Her comments underscore a familiar complaint from blacks who claim the Democratic Party takes them for granted.

Leggette voiced her concerns Tuesday during a rah-rah session with several local elected Democrats, hosted by U.S. Senate candidate Claire McCaskill. After reading the exchange posted on a local Weblog, Pub Def Weekly, I called Leggette to confirm her comments.

The quotes were correct, the 40-year veteran of local politics told me. She has no intention of voting for McCaskill’s Republican rival, U.S. Sen. Jim Talent, but, like me, she’s grown bored with the dog and pony show put on when major elections roll around. Democrats show up, throw out the “evil Republican” mantra, ask for black votes, then disappear without ever addressing our socioeconomic concerns or needs.

But, get this…
The answer she gave to Newsweek in an interview sometime before Friday October 13, 2006 is a flip from her Meet the Press interview five days earlier!
As Pete at Pubdef noted, Claire played a different tune with Tim Russert:

After weeks of responding to this constantly recurring question, Claire has finally turned to the standard “taken out of context” response.

According to the Meet the Press transcript:
MS. McCASKILL: I, I think if it is misinterpreted that I was calling the president a racist…

MS. McCASKILL: That was—I was acknowledging what Americans believed at the time.

MR. RUSSERT: So you stand by it?

to:
that’s taken out of context?

If we had a dollar for everytime that quote has been raised to Claire, well, we could restore Missouri’s Medicaid cuts.

Also…
Missouri Republicans are asking for an investigation into illegal campaigning for McCaskill.
From the Rolla Daily News:

The video, produced by Pubdef.net, an online political blog based in St. Louis, shows two ACORN workers protesting last week that they were never paid for signing up new voters. Two workers said in the video they were told by ACORN to solicit votes for McCaskill while registering voters. 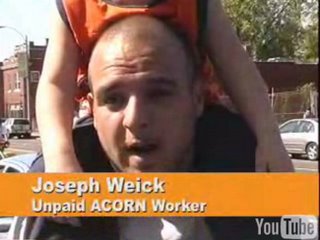 That video can be viewed HERE.