“Masturgayte?”
Well, that is what Gerard Vanderleun and The Anchoress are calling it.

I am posting this email from I received today from A Second Hand Conjecture and am asking for input and ideas:

I’ve been following your posts on FoleyGate and thought you may be interested in a new twist. Apparently, a former Page from Knoxville is now accusing Foley of sending him instant messages in 1997. 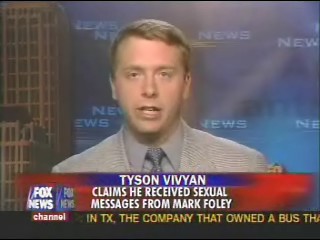 Vivyan said Thursday that Foley, a Florida Republican, began sending him instant messages about a month or two after his nine-month stint as a page ended in June 1997.”

That’s all fine and well, except for the fact that AOL didn’t even introduce IM’s until May of 1997, and before that only “ICQ” was available (with a subscription of approximately 850,000 users), which was rolled out in 1996.

The page also alleges that the IM’s were coming from “Maf54” (the same ID that Foley was using recently) and that he had no idea who that was:

“A few months later, he said, he started getting instant messages via computer from a person with the screen name MAF54, which has been linked in news reports to Foley. He wasn’t sure who it was, but the person knew his name and physical description. The person asked personal questions, such as his sexual preference.

“I began getting messages that were almost explicit in nature,” Vivyan said.

Vivyan said he figured the person had to be on Capitol Hill, and began looking up initials in a congressional guide. When he found Foley’s initials MAF, born in 1954 – he realized who it was.

“”It was almost surreal. Not only was I conversing with a congressman in a personal manner, I was conversing in a sexual manner,” Vivyan said.”

Does that sound plausible? He had no idea who it was, but guessed that it was someone on Capitol Hill?

The page also contradicts his assertion that “he never met Foley personally during his stint as a page” here:

“Vivyan also said he was invited to Foley’s Brownstone in Washington. Vivyan said he didn’t want to go alone, so brought a fellow page with him.”

(1) What was the likelihood that both Foley and the page were using IM back then, and that they were using the same service?

(2) If the page didn’t know who he was getting messages from, how did Foley know who to send them to? IOW, if the ID’s are anonymous, how did Foley
discover the page’s ID so he could send messages?

(3) Did the page meet Foley personally or not? How did he get invited to Foley’s brownstone if he never met him? Why did he go?

I don’t know what all this means, or why the page would lie, but the entire story sounds fishy.

The Strata Sphere, Macsmind and American Thinker are great resources for the latest on this story.

Clarice Feldman notices another Soros-funded organization coming on the scene.

A. Jacksonian has thoughts about the 1997 instant messages.

Update: Rick Moran brought up the “Concerned pages” connection. Here is more from The Progressive Report blog on Tyson Vivyan.