Tens of thousands rally against Chavez in Caracas on Saturday while the Pro-Chavez rally on Sunday fizzles.

Venezuelans rally to say “No” to communism! 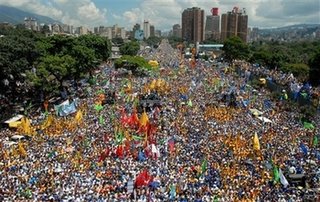 In this handout image released by Comando Rosales, supporters of opposition presidential candidate Manuel Rosales gather for a campaign rally in Caracas, Venezuela, Saturday Oct. 7, 2006. Thousands marched in the biggest show of public support seen yet in presidential campaigning for Venezuela’s main opposition candidate, who pledged to undo what he called the ills of President Hugo Chavez’s government. (AP Photo/Comando Rosales/HO) 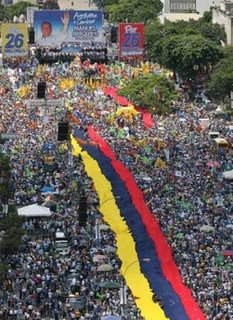 Thousands rallied in Caracas in the biggest protest in years against the Marxist Chavista regime:

Thousands of people converged on central Caracas waving Venezuelan flags and pounding drums in the biggest show of support yet for the main opposition presidential candidate.

Manuel Rosales, the governor of oil-rich Zulia state, called Saturday’s rally an “opposition avalanche” and pledged to undo what he called the ills of President Hugo Chavez’s government.

Mr Rosales accused the government of mismanaging the country’s oil wealth and ignoring crime, while also playing on fears that Mr Chavez’s close friendship with the Cuban leader Fidel Castro was leading Venezuela down the same path as the communist island.

Mr Rosales slammed the government’s record on crime, claiming that murders, kidnappings and other crimes in the South American country have sharply risen since Mr Chavez took office in 1999 – an issue that recent polls show is a top concern among Venezuelans.

He also accused Mr Chavez of giving away millions in aid and donations to countries around the world, while Venezuelans remain impoverished.

The opposition may have finally united. 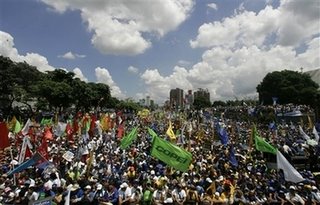 Protesters also gathered in Miami to rally against Chavez and support the opposition leader:

Venezuelan opposition groups in south Florida called on their countrymen to take to the streets ahead of the December 3 presidential elections. Some 400 Venezuelan-Americans turned out in a downtown bayside park, waving Venezuelan flags and chanting “Manuel Rosales for President” 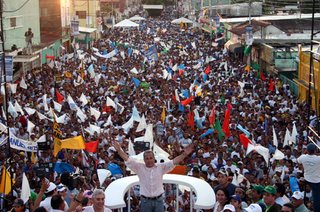 Alex Boyd at V-Crisis has the latest.