This isn’t really surprising, all you have to do is just look back in history a bit…

* Democratic Senator Ted Kennedy was scheming with the Kremlin against America and Ronald Reagan.
* Democratic President Carter sold out Iran.
* Democrat John F. Kerry testified in Congress that US military personnel personally raped, cut off ears, cut off heads, taped wires from portable telephones to human genitals and turned up the power, cut off limbs, blown up bodies, randomly shot at civilians, razed villages in fashion reminiscent of Ghengis Khan.
* Democrats in 1864 wanted to cut and run from the Civil War – where America lost over 500,000 lives.
* Peace democrats in 1864 prolonged the Civil War.
* Peace democrats fought against the Republican president in 1864 as they still do today.
* Democrats even today vote against domestic oil exploration and drilling.
* Democratic President Jimmy Carter watched communists take over Ethiopia, South Yemen (located at the mouth of the Red Sea where they could block Mideast oil shipments and access to the Suez Canal), Afghanistan, Angola, Cambodia, Mozambique, Grenada and Nicaragua- all on his watch.
* Democrats from Dukakis to Gore to Kerry all said SDI missile defense would be impossible and that missile defense would never work.
* Democrat Clinton failed to react to the numerous attacks on America by Islamic terrorists because of unwillingness to take risks and a lack of vision and understanding. 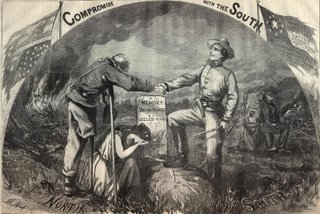 Democrats haven’t changed a lick in 142 years as you can tell from this cartoon by Thomas Nast, used as a Republican Poster against the “Chicago platform” of compromise with the South.
Click to Enlarge. It is amazing.

Today the choice for America is not about being pro-war or anti-war, it’s about winning or losing.

Let’s pray America decides to win. The stakes are too great.