The Page set up Filthy Foley!

House Speaker Dennis Hastert (R-Ill.) scheduled a press conference in Batavia, Ill., Thursday to announce that former FBI Director Louis Freeh would be asked to conduct an investigation of the House page program and recommend reforms of it. But Hastert made no mention of Freeh during his press appearance because House Minority Leader Nancy Pelosi (D-Calif.) rejected Freeh’s proposed involvement, said House Republicans. 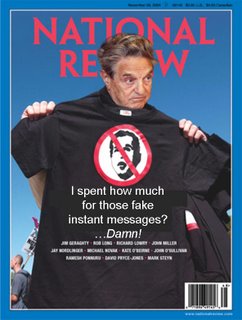 When asked about a groundswell of discontent among the GOP’s conservative base over his handling of the issue, Hastert said: “I think the base has to realize after a while, ‘Who knew about it? Who knew what, when?’ When the base finds out who’s feeding this monster, they’re not going to be happy. The people who want to see this thing blow up are ABC News and a lot of Democratic operatives, people funded by George Soros.”

Hastert suggested that operatives aligned with former President Bill Clinton knew about the allegations and might have been behind the disclosures in the closing weeks before the Nov. 7 elections, but he offered no proof.

You could do a study on ABC News- What an embarrassment!

* The instant messages were a setup by a kid with Filthy Foley
* The kid was not as young as they represented
* ABC leaves the kid’s IM address out in the open for hours leading to possible charges
* ABC claims they were “flooded” with more Foley instant messages from 2003 after their original story and this didn’t ring a bell?
* They now claim the evidence was overwhelming and they rule out that the whole scandal was a prank or sting.

ABC… You were duped!

The Parents of the original “email page” (not a prank) have nothing but praise for their Representative Alexander and how he handled the investigation.
Via Macsmind and CNN:

We would like to express our support for our congressman, Rodney Alexander, whose office sponsored our son’s position as a House page. As far as we know, Congressman Alexander’s conduct in this matter has been beyond reproach. He has tried his best to do what we have asked him to do from the very beginning: Namely, to protect the privacy of our son and family from the intense media scrutiny we are now having to endure.

In the fall of 2005, as soon as Congressman Alexander became aware of the e-mails received by our son, he called us. He explained that his office had been made aware of these e-mails by our son and that while he thought the e-mails were overly friendly, he did not think, nor did we think, that they were offensive enough to warrant an investigation.

Rather, we asked him to see that Congressman Foley stop e-mailing or contacting our son and to otherwise drop the matter in order to avoid a media frenzy. He did so. If we had any other knowledge or evidence of potential impropriety, we would have asked for the matter to be treated differently. For instance, we were not aware of the instant messages that have come to light in the past few days.

These instant messages, which have only recently surfaced as a result of the news of the ambiguous e-mails received by our son, are separate matters.

As a young man with integrity who had the courage to question the intention of the e-mails, we respect and honor our son as a hero. Despite his courageous actions, he is becoming a victim due to the harassment by some of the media.

This doesn’t seem to be getting a lot of attention tonight for some reason.

Jim Hoft
Jim Hoft is the founder of The Gateway Pundit, one of the top conservative news outlets in America. Jim was awarded the Reed Irvine Accuracy in Media Award in 2013 and is the proud recipient of the Breitbart Award for Excellence in Online Journalism from the Americans for Prosperity Foundation in May 2016.
"Stop it! It's Sick! It's Demonic!" - Black Women Urge Guilty White Liberals to Stop Kneeling Before Black People (Video)
ONE MILLION Unhinged Leftists Expected to Attend Protests in DC This Weekend -- And Crackpot Mayor Just Evicted ALL National Guard Units
STUNNING! More Than 10,000 Leftists, Looters, Thugs and Vandals Arrested at "Peaceful" George Floyd Protests
Dwayne "The Rock" Johnson Takes Swipe at Trump - Says the Process to Change Has Begun and "There's Going to Be Blood"
Washington DC Mayor Bowser Kicks Out Utah National Guard from ALL Washington DC Hotels - More Than 1,200 US Troops from 10 States Evicted
See more...