Fill in the blank:

If you thought this was written about President Bush and the Iraq War, you would be mistaken. This paragraph depicts the political climate in America 142 years ago… and describes the challenges that faced a different Republican President during a different US War.

Democrats haven’t changed a lick in 142 years as you can tell from their 1864 political poster. 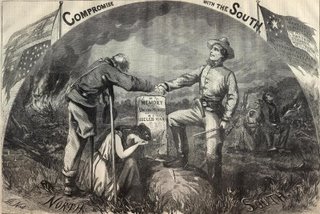 1.) Showing the enemy soldier stronger and more resilient than our own. Here the southern soldier (enemy) is upright and strong, the northern (US) broken and dejected.
2.) The “useless war” on the tomb. Even then the pessimist couldn’t see the righteousness of the conflict.
3.) The flag flown upside down in a distress display; even then they saw little hope and only failure.
4.) The grieving widow.

My, God! We know the outcome of that war, and if not for the strength and foresight of President Lincln (and a new willingness for sacrifice from the soldiers) did the north come out victorious in the end. This poster was produced in 1864. The former battlefield failure General McClelland was running on the democratic ticket as the peace promoter – a position opposite of the president- just like today.

I send this awed by it’s similarity to today’s anti-war voices.

This was also in my email yesterday…
The Copperheads of 1864:

Although the Democratic party had broken apart in 1860, during the secession crisis Democrats in the North were generally more conciliatory toward the South than were Republicans. They called themselves Peace Democrats; their opponents called them Copperheads because some wore copper pennies as identifying badges.

A majority of Peace Democrats supported war to save the Union, but a strong and active minority asserted that the Republicans had provoked the South into secession; that the Republicans were waging the war in order to establish their own domination, suppress civil and states rights, and impose “racial equality”; and that military means had failed and would never restore the Union.

Peace Democrats were most numerous in the Midwest, a region that had traditionally distrusted the Northeast, where the Republican party was strongest, and that had economic and cultural ties with the South. The Lincoln administration’s arbitrary treatment of dissenters caused great bitterness there. Above all, anti-abolitionist Midwesterners feared that emancipation would result in a great migration of blacks into their states.

As was true of the Democratic party as a whole, the influence of Peace Democrats varied with the fortunes of war. When things were going badly for the Union on the battlefield, larger numbers of people were willing to entertain the notion of making peace with the Confederacy. When things were going well, Peace Democrats could more easily be dismissed as defeatists. But no matter how the war progressed, Peace Democrats constantly had to defend themselves against charges of disloyalty. Revelations that a few had ties with secret organizations such as the Knights of the Golden Circle helped smear the rest.

The most prominent Copperhead leader was Clement L. Valladigham of Ohio, who headed the secret antiwar organization known as the Sons of Liberty. At the Democratic convention of 1864, where the influence of Peace Democrats reached its high point, Vallandigham persuaded the party to adopt a platform branding the war a failure, and some extreme Copperheads plotted armed uprisings. However, the Democratic presidential candidate, George B. McClellan, repudiated the Vallandigham platform, victories by Maj. Gen. William T. Sherman and Phillip H. Sheridan assured Lincoln’s reelection, and the plots came to nothing.

With the conclusion of the war in 1865 the Peace Democrats were thoroughly discredited. Most Northerners believed, not without reason, that Peace Democrats had prolonged war by encouraging the South to continue fighting in the hope that the North would abandon the struggle.

The Democratic Candidate of 1864, George McClellan. 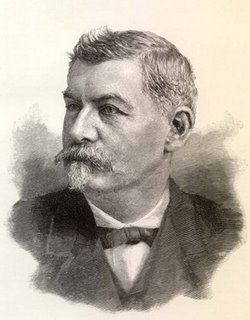 On Aug. 29, 1864, the Democratic National Convention assembled in Chicago, Ill., The Democratic Party Platform presented a plan of “Compromise with the South”, which became known as “The Chicago Platform”. They nominated General McClellan for the Presidency on the following declaration of principles:

Resolved… that this convention does explicitly declare, as the sense of the American people, that after four years of failure to restore the Union by the experiment of war, during which, under the pretence of military necessity, or war power higher than the Constitution, the Constitution itself has been disregarded in every part, and public liberty and private right alike trodden down, and the material prosperity of the country essentially impaired, justice, humanity, liberty, and the public welfare demand that immediate efforts be made for a cessation of hostilities, with a view to an ultimate convention of the States or other peaceable means, to the end that at the earliest practicable
moment peace may be restored on the basis of the federal Union of the States.

Resolved… that the direct interference of the military authorities of the United States in the recent elections held in Kentucky, Maryland, Missouri, and Delaware, was a shameful violation of the Constitution, and a repetition of such acts in the approaching election will be held as revolutionary, and resisted with all the means and power under our control.

More at Astute Blogger and Flopping Aces.
TigerHawk notes this wasn’t an isolated instance for the Donks.
And, this is a little crazy but you might enjoy it… if you think that cutting and running is a noble thing.

Previously:
Democrats Pull Out 1864 Party Platform- Dust It Off For 2006
Time Traveling With Today’s Democratic Party

The picture is not a Democratic poster but rather a cartoon by Thomas Nast, used as a Republican Poster against the “Chicago platform” of compromise with the South.

This doen’t change much your nice point about the Democrats, though it does change the point of view.

This print is not an 1864 Democratic Party Campaign poster, but a Thomas Nast political cartoon from Harper’s Weekly, and subsequently used by Lincoln’s party in his reelection. I have done a lot of research of 19th century political cartoons–putting the MA in History to good use!–and immediately recognized this exquisite example of Nast’s sharp cartoons.

Also… If you are a Civil War buff, this post on Lincoln’s death is very good.