Why do the murderous tyrants and terrorists always louse things up for Democrats around election time and force Americans to look at the real issues? 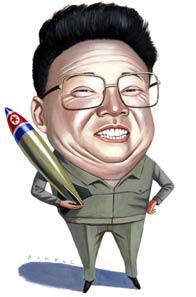 After all of that planning and scheming for Foleygate, Americans are going to be forced to look at who will better protect the country and this world from this latest world-changing event?

China fails to rein in its renegade communist neighbor. Japan to go nuclear?
Michelle Malkin has a huge roundup of reaction.
Including this…

OPFOR has reaction from a source on the peninsula.

China and Japan say they will not tolerate the action… before the bomb test:

On Sunday, China and Japan said in a joint statement that they would not tolerate such an action.

In response to the reported test, the South Korean armed forces have been put on a heightened state of alert, and President Roh Moo-hyun has called an emergency meeting of his government’s National Security Council.

North Korea says it was a historic event that “greatly encouraged and pleased the people.”

A senior Democrat blogger has informed me that they have evidence suggesting Karl Rove traveled to Mark Foley’s rehab this weekend and convinced him to solicit Kim Jong II with a series of salacious IM messages designed to cause him to explode in a nuclear fashion, albeit a diminutive one.

Updates on Monday via Brian Ross who will point out how the Vast Right Wing Conspiracy has placed America in greater danger, while not entertaining any discussion of Clinton’s role in North Korea’s nuclear development. It’s being suggested that we not turn our backs on the most serious cyber non-sex scandal in history at this pivotal time in world affairs until after November.

The Democratic Underground questions the timing.