One Jerusalem held a blogger conference call today discussing the challenges ahead for Western Society with author Mark Steyn. The audio from the call in now posted at the One Jerusalem website.

Every publication I pick up seems to have an essay by Mark Steyn. A friend describes his production level as “Writing with both hands.” 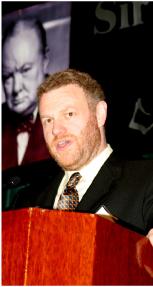 More important than his output is his message. Mark Steyn, auther of America Alone clearly understands the dangers facing Western Civilization and we should be thankful that he is dedicating his enormous talents to battling back the forces of evil.

Mark will join a www.onejerusalem.org bloggers conference call this Thursday at 2 PM to discuss his new book America Alone.

Even though I have read many articles and essays by him the book makes a unique contribution to the debate over what are the Islamic challenges facing the West and what must be done to defeat them. Mark’s book-length treatment of this subject should be read by every policymaker in the West.

Pamela at Atlas Shrugs has audio from the interview with Steyn and a terrific recap of the information shared by Steyn with the participating bloggers.
Steyn’s response to the “best case scenario”:

The best case scenario in the Middle East would be if we succeed in establishing a place for politics in the Middle East that is outside the mosque. At the moment, because of the repressiveness of the Mubarak sand the House of Saud, the only political space for politics is inside the mosque. If you can create some democratic space outside the mosque there’s a chance you can midwife not perfect countries but more moderate countries that would greatly kind of lower the kind of jihad fever.

Best case scenario for Canada is it decides to get real and join the anglosphere and stop pretending to part of the European Union in the wrong hemisphere and decides to be more like Australia.

The best case in America is we accept that in a two party system it would be helpful to have two sane parties. And the Democratic party decides that the outmoded European ideas are absolutely useless.

TigerHawk asked about “Cause and Effect” and comparison’s with Londonistan by Melanie Phillips, explain the defferent angle of attack between the two. Phillips describes multiculturalism verses what you describe as a social demographic state with collapsing reproductive rates.

Steyn explained that all societies are a balancing act but all Western powers got out of whack with their social programs. We accept that bodies mature much earlier but emotionally we retain young adults in adolescence into their 30’s. One of the consequences of that is that Westerners wait to have children.

The whole social democratic relations to life result in lower birth rates. When you are a society dependent on immigration this is a structural lapse and you have problems.

Islam has difficulty existing in multicultural states. Historically the less attractive attributes of Islam have been contained. But, jihadism has gone mainstream today. Palestinian terrorism was not seen essentially as as something disgustingly primal. We waste too much time thinking about all of these as “struggles”.

It is amazing how hard a nut multiculturalism is to crack.

Having seen the president just yesterday, Steyn says that Bush is holding up well and has tremendous energy. The constant attacks don’t seem to phase him.

Seculaism is not the answer for Western society. Moderate Muslims are seen as apostates in the Muslim World. Secularism has caused the hole in the European hearts. Secularism is not able to sustain itself after one generation.

One Jerusalem has the audio. It was a very interesting discussion. Sadly, I was pulled away a bit early.