Hmm… Who would Ahmadinejad vote for? 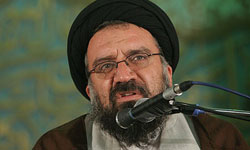 It was another lovely sermon in Tehran by Seyed Ahmad Khatami on Friday. (FARS)

There’s a strong wind blowing and the Iranian leaders are giddy with excitement!
The Spirirt of Man and Little Green Footballs are reporting:

Tehran’s interim Friday Prayers Leader Seyed Ahmad Khatami stressed that the savage and devilish performance of the US President George W Bush has placed Republicans in a very critical condition.

Addressing a large fervent congregation of the worshippers on Tehran University Campus today, Khatami noted the upcoming US Congress elections and the decisive role that the election results will play on the next presidential elections in that country, and said, “The savage and devilish acts and performances of Bush, as a Republican, have placed his party in a very critical condition.”