Besides short blurbs in the Washington Post and Harpers Mag, the mainstream media still refuses to report that democrats were peddling the Foley emails months before the story broke.

Instead the Leftist/Media continues to focus on Republicans, Dennis Hastert, attacks on gay Republicans and page ass-pats…

This is where the mainstream media is taking our country… 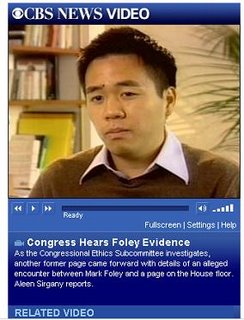 Click to Enlarge
Of course, an “ass pat” to most Americans is defined as “an alleged encounter” to CBS.

CBS interviews a former page who says he saw Foley pat another page on the butt,
VIDEO HERE
What the hell?

The witch-hunt continues…
Tonight, democrats are attacking another openly gay Republican for camping with kids 10 years ago!