Vicente Fox is learning from the best- When backed in a corner lash out with lies.
(See Macsmind- “Truth Hurts”)

The Mexican murder rate currently ranks #6 in the world from a 2003 study: 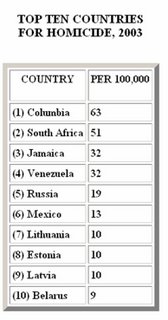 Fox lashed out at critics from the US on Friday wrongly claiming that that US has worse crime rate than Mexico:

Mexican President Vicente Fox said Friday that violence was a problem on both sides of the U.S.-Mexico border, and that American crime and homicide rates were worse than Mexico’s.

“There is work to be done on both sides. As we’ve always said, it’s a shared responsibility,” Fox said while traveling in Puerto Penasco, a tourist destination in the northern border state of Sonora that’s commonly referred to in Arizona as Rocky Point.

“I saw that crime rates in the United States increased 3.5 percent so far this year. So they have their own problems,” the president continued. “And with numbers of homicides, it’s better we don’t speak about them, because, even though they show up on the front pages every day, there are many fewer here than there.”

Of course this is donkey pucky!

But, not all of the blame should be on President Fox.
The media reports on violence and murder in the United States distort the actual picture to make it sound as if violent crime has increased in society since Bush took office (see BDS- Bush Derangement Syndrome).

Nothing could be further from the truth.

Like the unemployment rate, the US violent crime rate since President Bush took office is significantly lower than the averages from the 70’s, 80’s and 90’s! 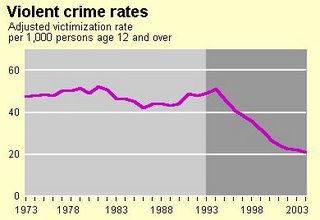 So, although the media is reporting that violent crimes rose 2.3% in 2005, what the media is withholding from you is that this rise follows record lows from the preceding years.

And, the current crime rate is still much lower than during the Carter, Reagan, Bush 1, and Clinton years!

More From Mexico… Now the multiculturalists are having the children pledge allegiance to the Mexican Flag in Texas!
Hat Tip Larwyn