This may explain the Baghdad curfew this weekend…

Iraqi and US forces arrested the bodyguard of Sunni politician Adnan al-Dulaimi on Friday… Adnan was not happy. 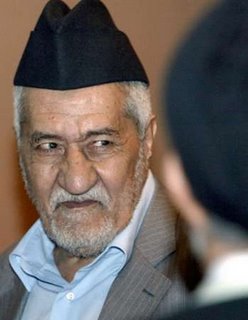 A Body guard for Adnan al-Dulaimiis an Iraqi Sunni politician and the leader of the General Council for the People of Iraq, was arrested by US and Iraqi forces yesterday. He was planning a massive attack in the Green Zone.
FOX News reports:

A bodyguard detained at the home of a leading Sunni Arab politician is suspected of being a member of Al Qaeda in Iraq, thought to be involved in planning a major suicide car bombing assault inside Baghdad’s fortified Green Zone, the U.S. command said Saturday.

Guard Khudhir Farhan was taken into custody Friday at the home of Adnan al-Dulaimi, the head of the largest Sunni bloc in parliament, al-Dulaimi told The Associated Press.

“The detained individual is suspected of involvement in the planning of a multi-vehicle suicide operation inside Baghdad’s International Zone,” the U.S. military said in a statement without identifying the suspect.

This may explain why the Iraqi government set up the curfew on Baghdad last night until Sunday morning:

“This operation in no way implies Dr. al-Dulaimi was associated with any illegal activity,” the military said, adding that the suspect was captured in a security trailer at al-Dulaimi’s home.

After the arrest, Prime Minister Nouri al-Maliki was advised by the U.S. military to shut down the capital and order its 7 million residents to stay at home.

“They have information terrorists entered Baghdad,” Interior Ministry spokesman Brig. Abdul-Kaim Khalaf told The Associated Press. “The prime minister agreed to give our security forces the freedom of movement to raid certain places.”

Adnan said he did not know why his guard was taken in talks with the press:

“Credible intelligence indicates that the individual and seven members of his cell were in the final stages of launching a series of vehicle-borne improvised device attacks inside the international zone, possibly involving suicide vests,” a military spokesman said.

Mr. Dulaimi identified the man as Khodar Farhan Ghargan. He said the raid of his compound was the third by American troops. He denied Iraqi television reports that troops had also found bomb-making equipment. He said troops did not enter his house.

News of the detention was likely to embarrass Sunni Arab political leaders, who have long dismissed accusations among rival Shiites that their guards and staff are insurgents…