Not everyone in Lebanon is in favor of a Hezbollah nation! 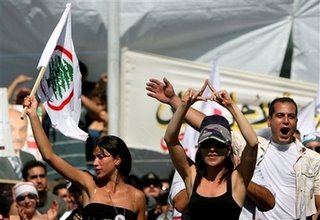 Supporters of the leader of the Christian Lebanese Forces militia, Samir Geagea, shout and wave Lebanese forces flags at an annual mass. (AP)

In a reference to Hizbullah, Geagea said: “Some say that they support the formation of a strong, just and capable state while their acts are hampering the creation of such a state.”

“They demand a strong state, but how can a strong state be built with a statelet within its midst? How can it be done with arms and ammunition continuing to flow in, when they force the state to follow their own schedule?” asked Geagea.

“We say to them that once we find a solution to the arms, it will be possible to build a strong state,” he said, remaining calm throughout his speech. 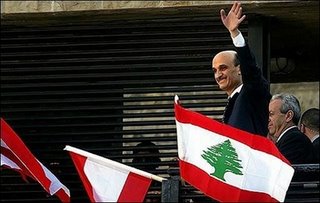 Lebanese Christian leader Samir Geagea waves to the crowds during a rally. Geagea scoffed at Hezbollah claims of victory in its conflict with Israel and avowals that it wanted a strong state in Lebanon.(AFP/Marwan Naamani) 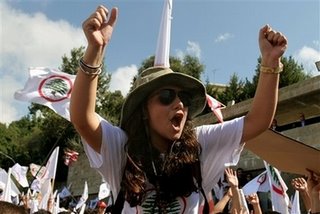 A Lebanese supporter of the leader of the Christian Lebanese Forces militia, Samir Geagea. (AP) 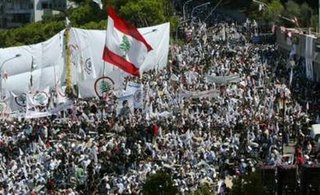 Lebanese Christian supporters of the Lebanese Forces militia-turned-political-party gather during a rally to commemorate their comrades that were killed during Lebanon’s 1975-1990 civil war, in Harissa village, north of Beirut, September 24, 2006. (REUTERS/Mohamed Azakir)

Tens of thousands of people joined a mass rally staged by the anti-Syrian Christian party, Lebanese Forces (LF), for its “martyrs” from Lebanon’s 1975-1990 civil war.

Crowds flocked to a hilltop Maronite cathedral in Harissa in the Christian heartland north of Beirut Sunday, site of a giant statue of the Virgin Mary, for a mass and to hear a speech by LF leader Samir Geagea, a member of Lebanon’s anti-Syrian “March 14” group.

The rally came just two days after the Syrian-backed Shiite Muslim group Hezbollah held a giant demonstration in Beirut attended by hundreds of thousands to celebrate its “victory” in the devastating July-August war with Israel.

The March 14 group, which includes parliamentary majority leader Saad Hariri, a Sunni Muslim, and Druze leader Walid Jumblatt, has criticised Hezbollah’s capture of two Israeli soldiers on July 12 that sparked the conflict, and has called for group to disarm. 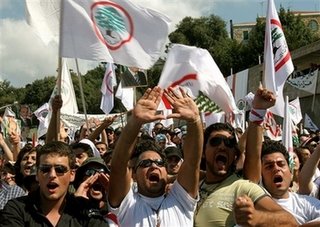 Supporters of the leader of the Christian Lebanese Forces militia, Samir Geagea, shout and wave Lebanese forces flags at an annual mass to commemorate Christian militiamen killed during the bloody sectarian conflict at the shrine of the Virgin Mary in the town of Harissa, 27 kilometers (17 miles) north of Beirut, Lebanon, Sunday, Sept. 24, 2006. Tens of thousands of right-wing Christians turned out at a tumultuous rally north of Beirut Sunday led by a notorious anti-Syrian former warlord, in a show of strength two days after a massive gathering by the rival Muslim Shiite Hezbollah. (AP Photo/Petros Karadjias)