These Radical Muslim riots are far from being over… 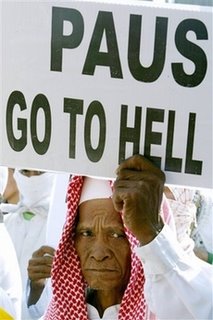 A Muslim man holds poster during a protest outside the Vatican Embassy in Jakarta, Indonesia, Monday, Sept. 18, 2006. (AP)

The same vicious group that slaughtered two US soldiers and beheaded 4 Russian diplomats is calling for a jihad against the “worshippers of the cross”:

An Iraqi militant group led by al-Qaeda vowed a war against the “worshippers of the cross” in response to a recent speech by Pope Benedict on Islam that sparked anger across the Muslim world.

“We tell the worshipper of the cross [the pope] that you and the West will be defeated, as is the case in Iraq, Afghanistan, Chechnya,” said a statement posted to a website by the Mujahideen Shura Council, an umbrella group led by Iraq’s branch of al-Qaeda.

As if we already did not know they were waging jihad against the world! 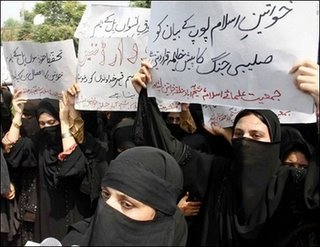 Veiled Pakistani activists of Jamiat Ulma-i-Islam carry placards during a protest against the remarks of Pope Benedict XVI, in Peshawar. Benedict’s personal apology for criticising Islam has failed to stem anger in some parts of the Muslim world despite calls for calm from Islamic and Western leaders.(AFP/Tariq Mahmood)

Meanwhile… a Saudi paper says the Pope’s comments “beat the drum of war” for conservatives in the United States(?):

The Pope’s comments, made Tuesday in a university address in his native Germany, were not “an ordinary blunder requiring an apology”, the Saudi Arabian Al-Yom wrote in its Monday edition one day after the pontiff said he was “deeply sorry” for the outrage caused.

“These remarks belong in a current of thought that is in total accord with the ideas of the extreme right in the United States on the conflict between civilisations,” it said.

“This ideology beats the drum of war even more.”

Dan Riehl has an Al Qaeda video to assess your options.

Rod Liddle at The Times Online offers this:

A subtle and astute politician, perhaps Benedict should apologise for having caused offence — and then demand by way of reciprocation that Turkey — Islam’s democratic representative in the West — return to Christian denominations the land it has confiscated from them, allow the Christian churches to open seminaries (which they are barred from doing), make it easier to build new churches, and lock up Turks who terrorise priests. And maybe allow Turks to convert from Islam to Christianity without fear of official or unofficial reprisal. A fair exchange?