How do you explain to 3 or 4 year-olds that their Daddy just blew himself up trying to take out an oil pump… in the name of Allah? 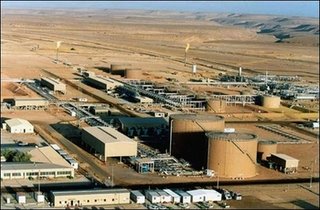 The Yemeni authorities are reporting this news just days before a national election where the president of two decades is predicted to win (surprise!):

Suicide bombers tried to strike two oil facilities in Yemen with explosives-packed cars, but authorities foiled the attacks and four bombers and a security guard were killed, the government said Friday.

The attempts came ahead of this week’s presidential elections, in which President Ali Abdullah Saleh faces a serious challenge for the first time since he became head of state in 1978.

They also came days after al-Qaida’s No. 2, Ayman al-Zawahri, issued a videotaped threat of attacks on the Persian Gulf and on facilities he blamed for stealing Muslim oil.

Friday’s attacks happened 35 minutes apart, targeting a Yemeni oil refinery in the northeast province of Mareb and a Canadian-Yemeni oil storage facility at the Dubba Port in Haramut province — scene of a 2002 attack on the French tanker Limburg, an Interior Ministry statement said.

Maybe this is the attack that Al-Zawahiri warned the West about. If so, Al Qaeda is in worse shape than we thought.