The violent death of Mohammed Taha raises concerns that extremist groups are once again active in Sudan. 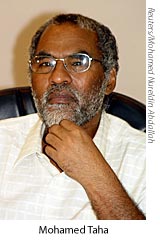 Mohammed Taha, editor-in-chief of the private daily Al-Wifaq, was found beheaded.
The Committee to Protect Journalists reported the news today of the kidnapping and beheading in Sudan of the newspaper editor.

All Africa has more on the murder and previous trial of Mohamed Taha:

Taha was tried for “blasphemy” in 2005, on the basis of a complaint by a fundamentalist group, Ansar al-Sunnah. The article that offended them related to a more than five-centuries-old Islamic manuscript entitled “the unknown in the life of the prophet” and which cast doubt on the prophet’s ancestry.

Major demonstrations were organised by the imams of Khartoum demanding that the journalist, himself a member of the Muslim Brotherhood, be killed. The paper was suspended for two months.

The manuscript was apparently originally written by Al-Maqrizi, a Muslim historian, and it told that the father of Mohammed was not called Abdallah but Abdel Lat, or “slave of Lat”, a pre-Islamic idol.

More from the BBC–

Thousands of people demonstrated outside a courtroom in central Khartoum calling for Mr Taha to be put to death.

After several emotionally charged days the case was adjourned and later quietly dropped.

Our correspondent says the killing of Mr Taha, an ally of Khartoum’s Islamist government, will raise fears that extremist groups are once again active in Sudan.