Rosie drew loud applause for her outlandish attacks on Christianity on The View. 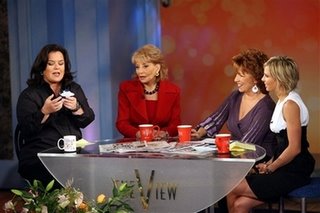 Rosie O’Donnell, left, gives away a cruise as she joins co-hosts Barbara Walters, second from left, Joy Behar, second from right, and Elisabeth Hasselbeck during the taping of the first show of the 10th season of the ABC talk show, The View,’ Tuesday, Sept. 5, 2006 in New York. (AP)

During a discussion on the 9/11 anniversary on Tuesday, O’Donnell expressed her clear opposition to the war in Iraq but also made parallels between “radical Christianity” and “radical Islam.”

“Radical Christianity is just as threatening as radical Islam in a country like America where we have a separation of church and state. We’re a democracy here,” she said on the show.

This really is nothing new for the Left who still do not understand who or what we are fighting against in the War on Terror.

Similarly…
Hillary Clinton dumped on all religions back in January on Oprah. 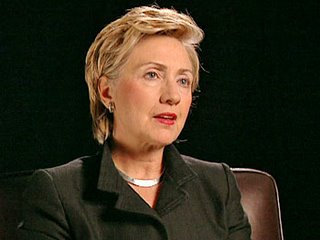 “Right now the greatest threat to world peace is intolerance cloaked in religion,” Senator Clinton says. “It’s people who believe that their religious views are the only right ones, and therefore, any means that is available to them—including flying planes into towers or planting bombs in subways—that somehow they are permitted to do that because they’re acting in the name of a religion. That gives them the justification to wreak havoc and violence.”

The Senator stresses that we must still continue to have open minds when it comes to our views of people around the world. “Not that we are going to give up what we believe, but in the complex world in which we live, we have to recognize that not everybody will see the world the same way.”

Doug Ross has a brilliant post on “Radical Christianity.”

Previously:
Hillary Says the Threat is from All Religion