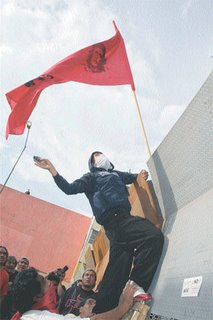 A Lopez Obrador Leftist scaling the parliament building in Mexico City blocking Vicente Fox from his final State of the Union Address to Congress. (Cronica)

A. M. Mora y Leon has a brilliant recap of the situation in Mexico since the Leftist candidate, Lopez Obrador, has insisted that he is the winner.

All of the Leftist turmoil has caused Vicente Fox’s popularity to soar.

Of course, Lopez Obrador promised to respect the outcome of Mexico’s presidential election several times before the vote, before he lost! -It’s even on Video HERE–