Why won’t the democrats just admit it?
Everyone knows that they are going to pursue impeachment against President Bush as soon as they take the House this fall. Why don’t they just admit it?

For 6 years democrats have been utterly consumed with Bush hatred. Why would anyone believe that this will stop if they take the House. It is their whole platform…
Get rid of Bush! 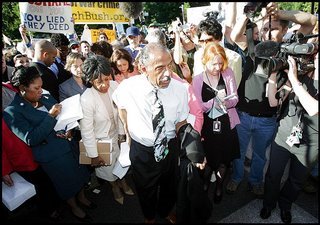 Rep. John Conyers Jr., center, and other Democrats held a mock impeachment hearing as a protest against the war in Iraq in the capital basement. (June 2005)

Rep. Conyers is a special case:

* He met with lawyers on Tuesday March 11, 2003 to start work on impeaching Bush.
* On June 16, 2005 Conyers played the impeachment dressup game with mock hearings in the capital basement.
* In July 2005 Conyers and Representative Frank also met for another round of impeachment fantasy.

Then… Conyers told the mainstream media in May that he would not rush to impeach.

Now… in a recent article at a far left website Conyers writes that he intends to bring his impeachment plans out of the basement and into hearings:

Two years ago, a tireless band of organizers launched the Progressive Democrats of America in Roxbury and I was there with them at their launch. Against all the odds, PDA decided that it could move the Democratic Party, change American politics for the better, and help make this a more peaceful, more just world.

That same fall, when irregularities emerged after the 2004 elections in Ohio(?), PDA and I again worked together to challenge the results, to hold voting rights hearings in Columbus, and to investigate the results. Most people, and even many progressive groups, avoided the Ohio controversy at the time but PDA showed up to fight back against the fraud(?).

When the Downing Street Memo was leaked in the spring of 2005, most of the mainstream media and the pundits mocked its value. Together with PDA and the newly-launched activist internet group AfterDowningStreet.org (whose founding members were all active PDAers, including Tim Carpenter), I held packed hearings in Washington, D.C., with testimony from Cindy Sheehan, Joseph Wilson, Ray McGovern, and John Bonifaz.

And our close working relationship continues to the present, as PDA keeps pushing, day after day, for accountability at long last by the Bush Administration.

Plus, PDA understands that to “move forward with those investigations”, with an increase in the minimum wage, with health care for all, with the Apollo initiative for renewable energy, with developing a plan to end the occupation and real election protections, we must first take back the House in November and PDA staff and volunteers are spending countless hours this year helping progressive underdog candidates grow stronger.

So Happy Birthday, Progressive Democrats of America. I look forward to working together with you next year, under vastly improved working conditions.

The democrats can’t help it.
Expect impeachment hearings by mid-January.