The Muslim world is outraged at Pope Benedict XVI for his “anti-Islamic” remarks made during a speech at a German university this week.

Wasn’t this his point about Muslims and violence? 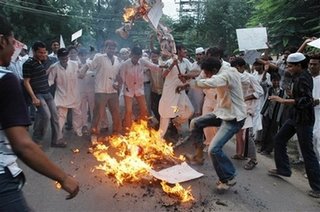 Muslim students burn an effigy of Pope Benedict XVI at a protest rally in Allahabad, India, Friday, Sept. 15, 2006. A growing chorus of Muslim leaders has called on the Pope to apologize for the alleged derogatory comments made by him about Islam. (AP Photo/Rajesh Kumar Singh)

The stongest words, so far, come from a radical cleric in Turkey.
The New York Times reports:

Some of the strongest words came from Turkey, possibly putting in jeopardy Benedict’s scheduled visit there in November.

“I do not think any good will come from the visit to the Muslim world of a person who has such ideas about Islam’s prophet,” Ali Bardakoglu, a cleric who is head of the Turkish government’s directorate of religious affairs, said in a television interview there. “He should first of all replace the grudge in his heart with moral values and respect for the other.”

Muslim leaders in Pakistan, Morocco and Kuwait, in addition to some in Germany and France, also criticized the pope’s remarks, with many demanding an apology or clarification. The extent of any anger about the speech may become clearer on Friday, the Muslim day of prayer in which grievances are often vented publicly. 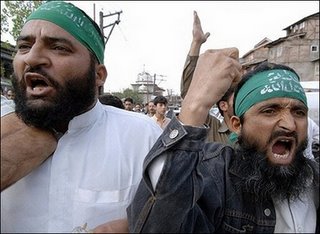 Indian Kashmiri activists of the pro-Pakistani Muslim League Jammu Kashmir (MLJK) shout slogans against Pope Benedict XVI during a protest in Srinagar. A wave of Muslim outrage swept the globe… you know the rest- fill in with the weekly reason. (AFP)

But, Pope Benedict has a long ways to go before he matches the venom preached at the Friday sermons throughout the Muslim World!

Here’s a sampling of a Mideast sermon…
Hezbollah: Coming Soon To Your Hometown

It appears the leaders of Radical Islam have a bit of a head start on this Pope.

Michelle Malkin has more on this latest outrage.

And, here is some Radical Irony.
The Political Pit Bull has more on the entire speech which doesn’t sound so “Hitler-esque.”

Prairie Pundit has more on the latest tantrum.