Typhoid Got Him!
Doctors were not able to reach his cave in time!

Saudi sources are saying:
“It said he died of a very serious case of typhoid causing partial paralysis of his internal organs.” 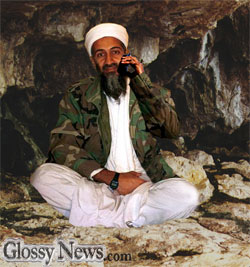 The Khaleej Times is reporting:

The newspaper said it based its information on a document classified ‘defence secret’ originating in the French DGSE intelligence services. According to the story, the DGSE informed President Jacques Chirac of the Saudi report on Thursday.

The DGSE document, printed with the report, reads in part, ‘According to a usually reliable source, the Saudi intelligence services are said to have acquired the information that Osama bin Laden is dead. The information gleaned by the Saudis indicates that the head of Al Qaeda was a victim of a very strong attack of thyphoid… in Pakistan on August 23, 2006.’

The document goes on to say that bin Laden’s geographical isolation rendered all medical assistance impossible.

A French regional newspaper quoted a French secret service report on Saturday as saying that Saudi Arabia is convinced that al Qaeda leader Osama bin Laden died of typhoid in Pakistan last month. L’Est Republicain printed what it said was a copy of the report dated 21 September and said it was shown to President Jacques Chirac, Prime Minister Dominique de Villepin and France’s interior and defence ministers on the same day.

“According to a usually reliable source, the Saudi services are now convinced that Osama bin Laden is dead,” the document said.

The report, which was stamped with a “confidential defence” label and the initials of the French secret service, said Saudi Arabia first heard the information on 4 September and that it was waiting for more details before making an official announcement.

There’s a lot in this headline…. “Pakistan says it was not notified.”

Here is more on this news from Arabia.
Ace has doubts but put up the fireworks anyway.

The Jawa Report says that the report comes from an actual secret document and that the French are investigating. 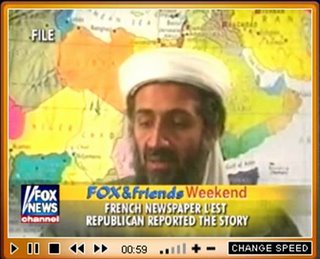 Most likely, the neocons will put him in deep freeze until the end of October and thaw him out for the elections.

Update: TIME magazine is also reporting this news from their Saudi source.

CNN is not convinced.

“paralysis of the inner organs”…yup. Sounds like typhoid.
Salmonella causes diarrhea, but typhoid causes Ileus (slowdown of the intestines), and people don’t poop at all…the intestines perforate on day 21.
Typhoid is spread thru dirty water…and is easily treated with antibiotics (although it has become resistant to antibiotics in many areas). However, if you don’t catch it early and give 21 days of chloramphenicol or antibiotics, the perforation is often fatal even in hospitals.
Sounds like he was really hiding somewhere primitive…
I’ve treated a lot of cases in Africa.