At 2:00 AM on May 16th, 2006… the citizens of Jamestown, a quaint town of 4000 people located in the middle of Missouri, waited up late on a Monday night to honor an American hero. Hundreds of friends, family and supporters from the community met at 2:00 AM to welcome home their local hero, Marine Lance Cpl. Leon Deraps, from Iraq.

It would be his final trip back home to middle Missouri.

Marine Lance Cpl. Leon Deraps, 19, was killed on May 6 while conducting combat operations with the 7th Engineer Support Battalion, 1st Marine Logistics Group, in the al-Anbar Province of Iraq. 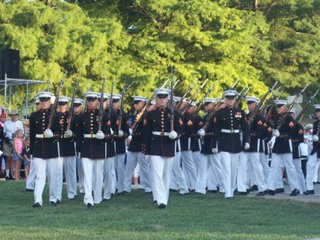 But, Leon is not forgotten.
This comment was just posted on this blog in a previous story on Marine Lance Cpl. leon Deraps:

Leon we are all still thinking of you. you are always in our thoughts and prayers. me and craig are getting ready to leave for bootcamp i know you’re gonna give us the strength to keep on keepin on.
love you lots buddy, Josh Plaster Class of 2005 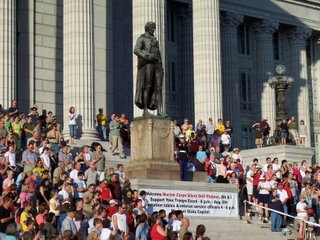 (Click on each picture to Enlarge)
These photos were taken at the Missouri Support The Troops Rally on August 5, 2006, at the State Capital in Jefferson City, Missouri.

Pat Kerr organized one of the largest troop support rallys ever in Missouri.
The ceremony included a memorial for the fallen Missouri troops as well as a performance by the Marine Silent Drill Team. 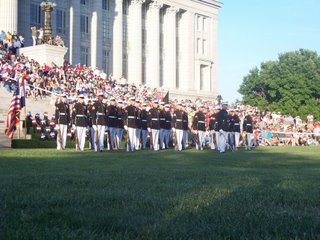 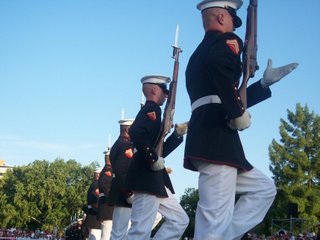 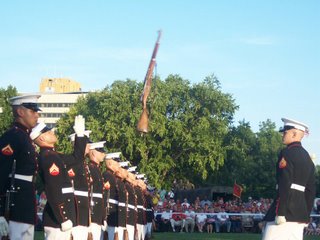 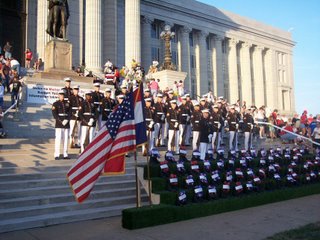 The boots of fallen Missouri soldiers and Marines from the War on Terror were lined up at the base of the capital steps for the rally.
Rest in Peace.