Last night, Arianna Huffington made it clear that the Left she represents, sees the War in Iraq as a mistake in magnificent proportions… Nothing new.
(Although they all voted for the war and although there has been record low casualties!)

But, Arianna went as far as to brush off the genocide of Kurdish families under the Saddam Hussein regime! Although honest, it was a brand new low for the not just bitter, but insensitive Democratic Party.

Today, Kofi Annan, the UN leader who has witnessed genocide in West Africa in the ’90’s, Central Africa up to this day, the Darfur Region of Africa, etc. agreed with Arianna Huffington. Kofi admitted he had talked with the regime heads in the region and that is what he was told! 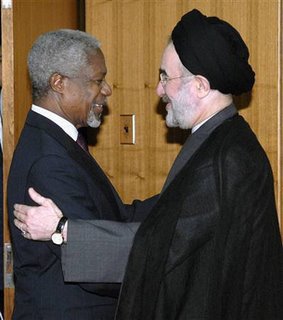 Kofi Annan continues to show indifference to the slaughter of Iraqis past and present.
Rarely does he condemn the terrorist attacks in the country.
Never does he talk of the mass slaughter by Saddam Hussein who murdered over one million Iraqis!
Never does Kofi reach out to the people of Iraq to offer hope or show support.

Today Kofi calls the War in Iraq a disaster!

Kofi Annan, fresh from a two-week tour of the region, told a news conference on Wednesday that most of the leaders he had spoken to felt the invasion of Iraq and its aftermath had been a “real disaster for them”.

“They believe it has destabilised the region,” he said.

However, Annan said that leaders in the region were split over whether the US-led force in Iraq should now pull out or stay.

“Many leaders think the US has to stay in Iraq until things improve, and that having created the problem they cannot walk away,” he said.

Annan went on to explain the other school of thought: “Iran believes the presence of the US is a problem and that the US should leave. And if the US were to decide to leave, they would help them leave.”

In Washington, Tony Snow, the White House spokesman, said he disagreed with Annan’s characterisation of the situation.