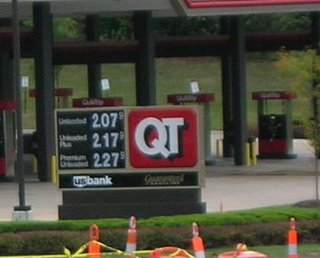 Democrats running for Congress are moving quickly to use the most recent surge in oil and gasoline prices to bash Republicans over energy policy, and more broadly, the direction of the country.

Mr. Schumer said Democratic candidates in 10 of the 34 Senate races this year had scheduled campaign events this week focusing on gasoline prices.

Officials at the Democratic Congressional Campaign Committee, which advises House candidates, said they sent a memorandum to candidates on Thursday offering guidance on using the issue to their advantage.

Maybe if the democrats had not voted against every single drilling and exploration bill in the last 30 years, America would not be depending on the world’s dictators for oil, and China would not be drilling 70 miles off of the Florida coast!

Talk about a national security risk!

Lori Byrd at Wizbang has her own gas rant.