One out of seven Russians are Muslim. 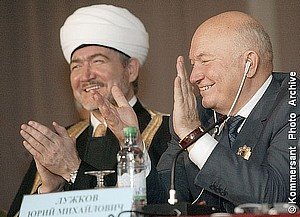 Islamic leaders from Russia and the Middle East met in Volga to slam the US and Reminisce on the old Soviet days:
From MosNews:

…In addition to historically close ties with numerous Islamic countries, Russia has 20 million Muslims among a total population of 142 million.

The country also gained observer status in the Organisation of the Islamic Conference in 2005, and “should feel that it is part of the Muslim family,” Ravil Gainutdin, president of the Russian Council of Muftis, told AFP. “As a member of the UN Security Council, Russia will be able to actively defend the rights of Muslims and prevent rules being dictated that they oppose,” Gainutdin said.

“The Islamic world wants Russia to return to the role the Soviet Union played in the Muslim world,” Gainutdin said.

The Soviet Union was a prominent supporter of Islamic countries in conflicts with Israel, including the Arab-Israeli War in 1967 and the October War between Egypt and Israel in 1973.

For Ramil Yunussov, imam of the Kul Sharif mosque in Kazan — Europe’s largest — the conference was meant to overcome what he called a lack of understanding between East and West. “It should explain the essence of Islam to Europe in a language Europeans can understand,” Yunussov told AFP.

Mufti Ravil Gainutdin also declared his support for Iran on global issues in May, especially on Palestine and on its own peaceful nuclear activities.